Now that we are finish with famous Religious places and historical places around Yangon and Bagan, it’s time to head out to the beach and have a few days of relaxing time.

There are several beaches around Myanmar, but this time we decided to go to Ngwe Saung Beach.  A very laid back place with an amazing sunset.

Since we were coming from Bagan, we needed to take the night bus back to Yangon then transfer to another bus terminal bound for Ngwe Saung. We were not familiar with the bus terminal so we asked our bus driver if he can drop us off the nearest area where we can switch to Hlaing Thar Yar bus terminal (Dagon Bus Terminal).

From Yangon, it will take another 7-8 hours to Ngwe Saung but it will greatly depend on your bus driver. The bus ride itself is an adventure. Before reaching Ngwe Saung, it will need to pass over the mountain and the way is well paved but curvy without guard rails and it is also a two way road. If there are two buses coming in from both direction, one needs to stop and make way for the other. If you are planning to visit during the rainy season (May-October) make sure to check if the buses are operating.

We spent a couple of days in Ngwe Saung and it was very relaxing.

A panoramic view of the beach. 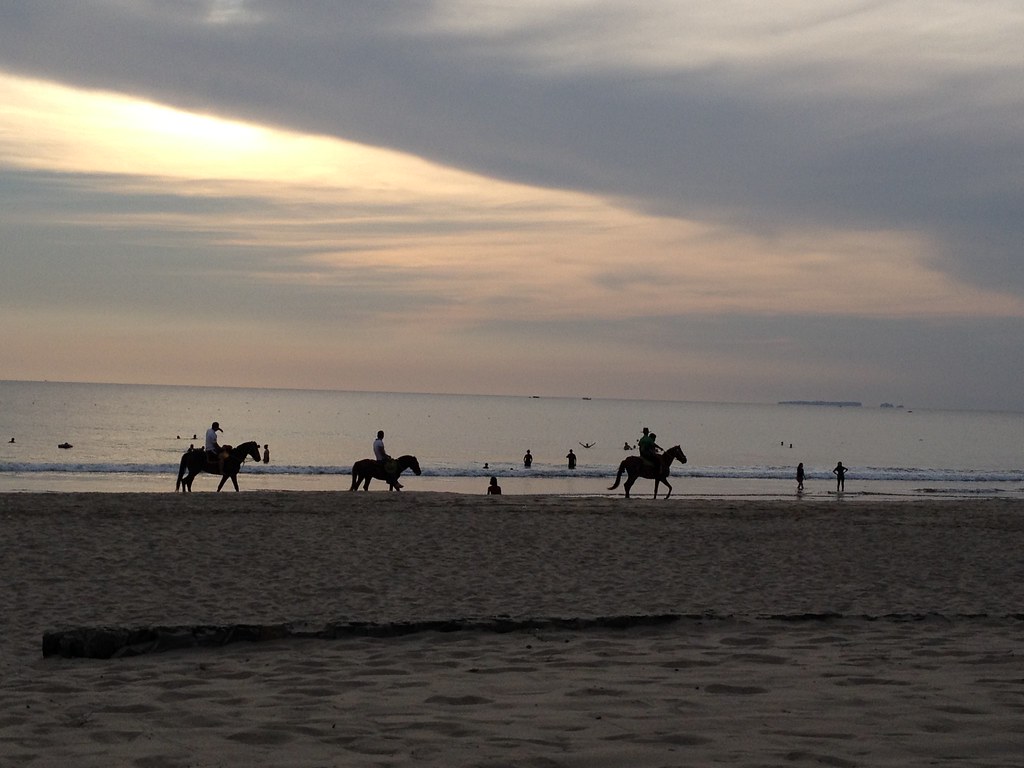 There are also horseback riding available. 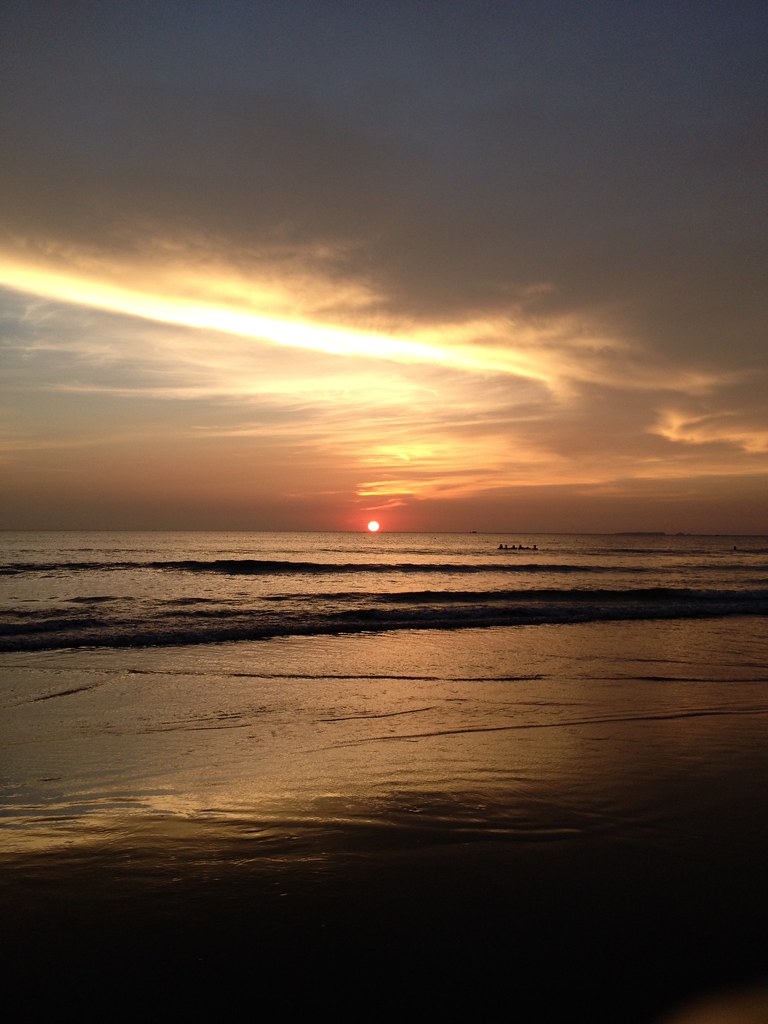 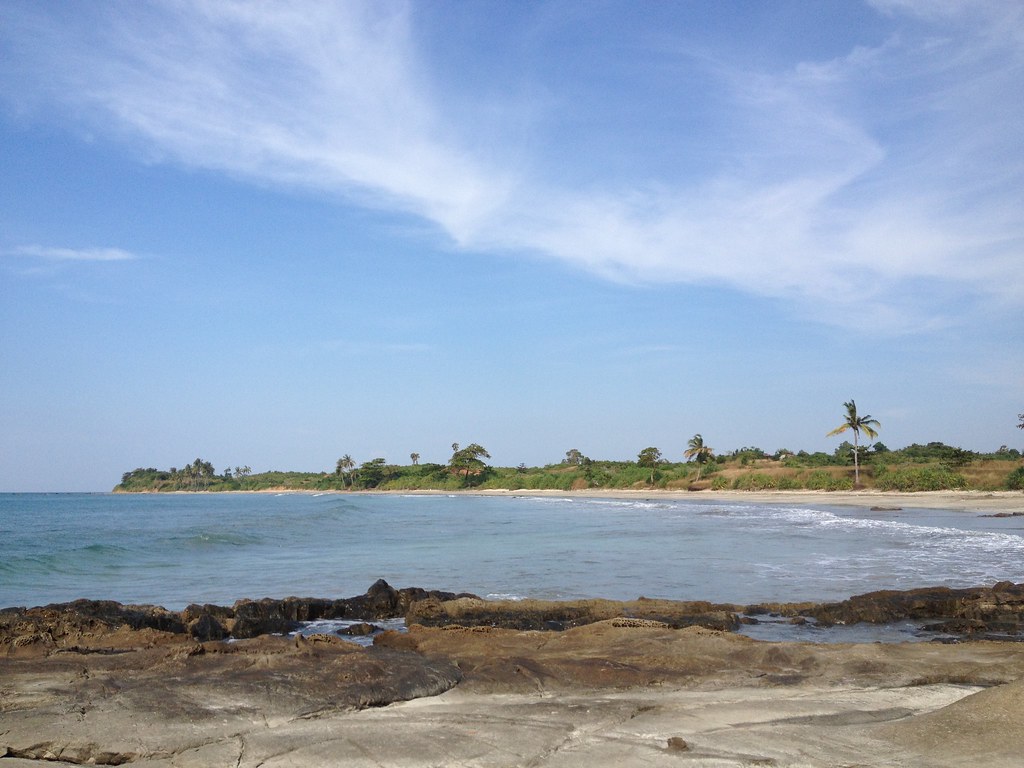 We walked all the way to the other side. 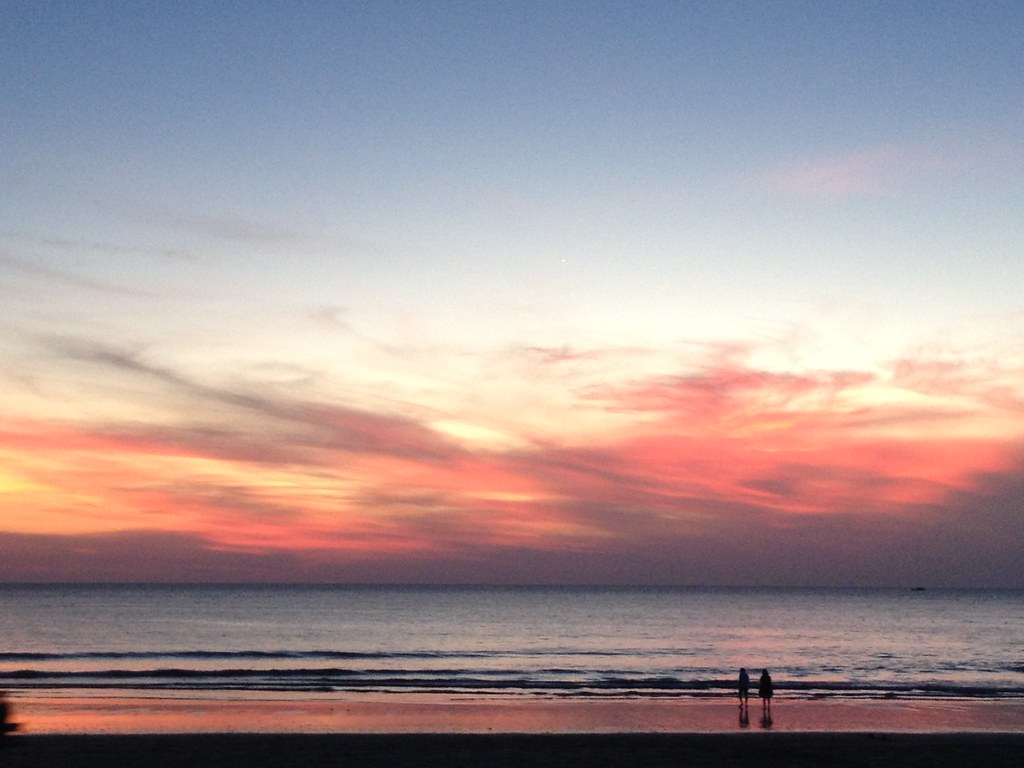 The couple and the sunset.

Electricity is not 24/7 so sound big hotel have their own power generator.

Food is also good and affordable. The best time to go is during November – April , which is the dry season in the country.

Growing up, I always here about stories of witchcraft about this Island. Unbeknownst to me and this island is also very beautiful.

After I saw pictures of my former co-worker who is  local of the island and some bloggers, I made a decision to visit it when I have my vacation and last April I finally had that chance.

At first, I was discouraged to find out that transportation to Siquijor from Cebu takes more than 12 hours by boat and will arrive in the island around midnight.

If you are planing to take a bus from Cebu, you need to go to South Bus Terminal. Take a Ceres Liner that goes directly to Dumaguete City.

We left Cebu City around 7 am in the morning and finally got to Siquijor around 1:30ish pm.  As of this writing, bus fare was about 205 pesos + 75 pesos for the ferry. You can ask the bus conductor to drop you off the port so that you don’t need to take a trike from bus terminal to port again.

We had a little problem with our accommodation but that is another story.

After we got settled down, it’s time to see the beauty of Siquijor.

Majority of the Resorts and Guesthouses are located in San Juan area. 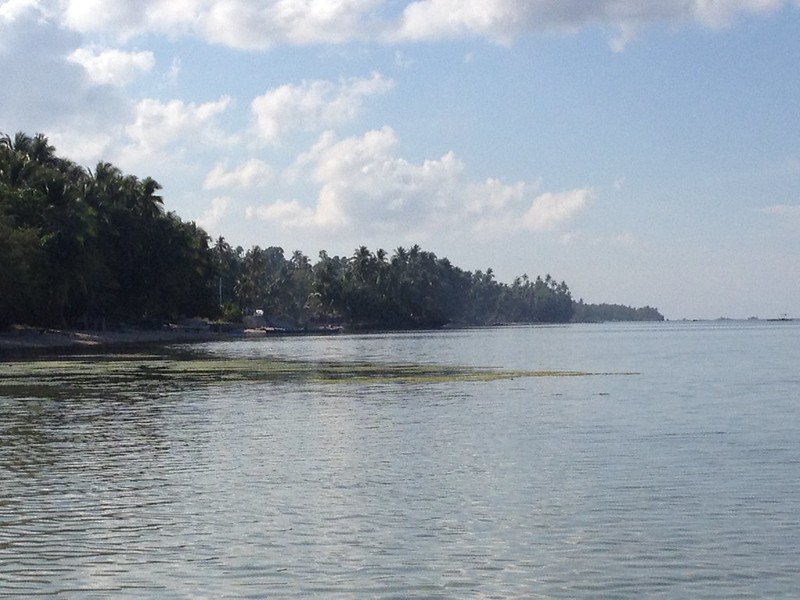 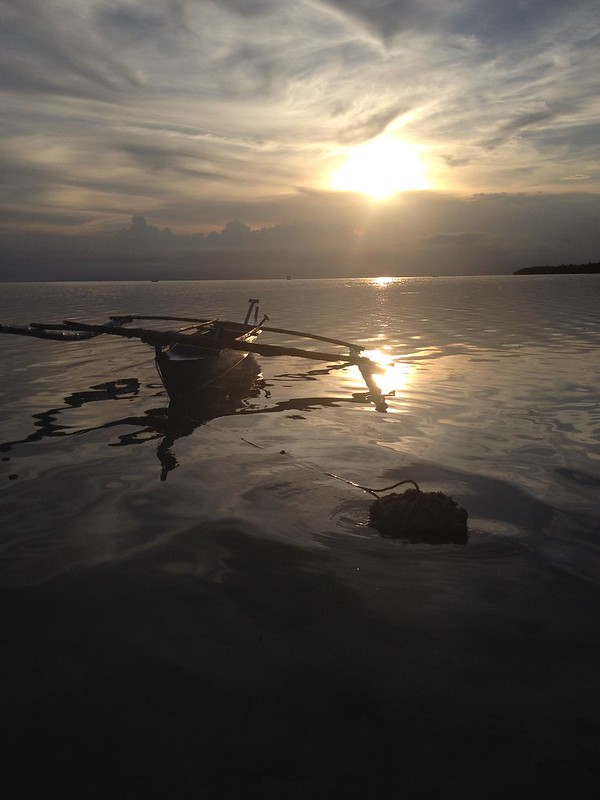 The Sunset and the boat.

My not-so-little cousin and the sunset around San Juan

A panoramic view in front of our apartment.

There are two ways to see the Island, follow the coastal road and go around or take the mountain road and explore the inner Siquijor.

Our group decided to do the coastal tour instead. We rented a multi-cab for day, which is 2000 pesos for the whole day, including driver who was supposed to be also our tour guide but a dear friend from college who is currently working there and who I have not seen for the past 15 years, became our tour guide.

Our first stop was the place called Enchanted tree, which a very big Banyan tree. At the foot of the tree there is a pool of water with fishes that can eat away calluses. Each person has to pay 5 pesos to enter. 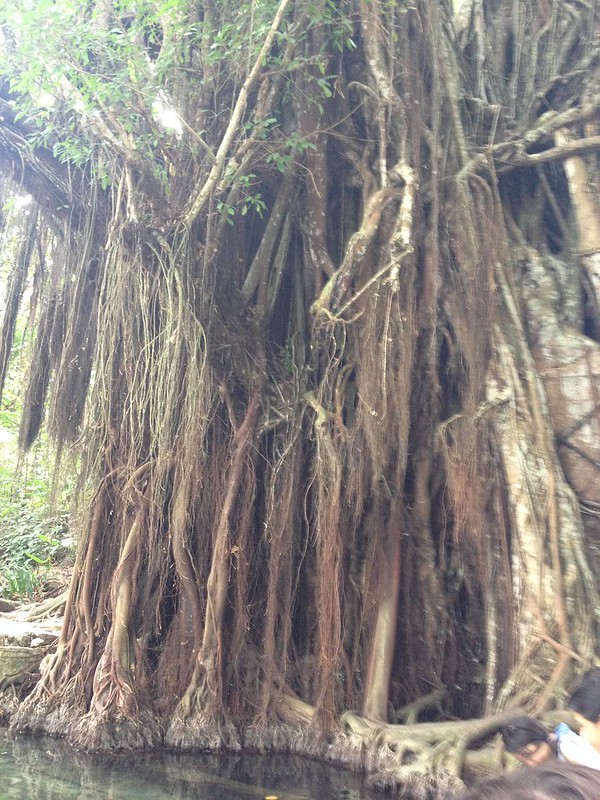 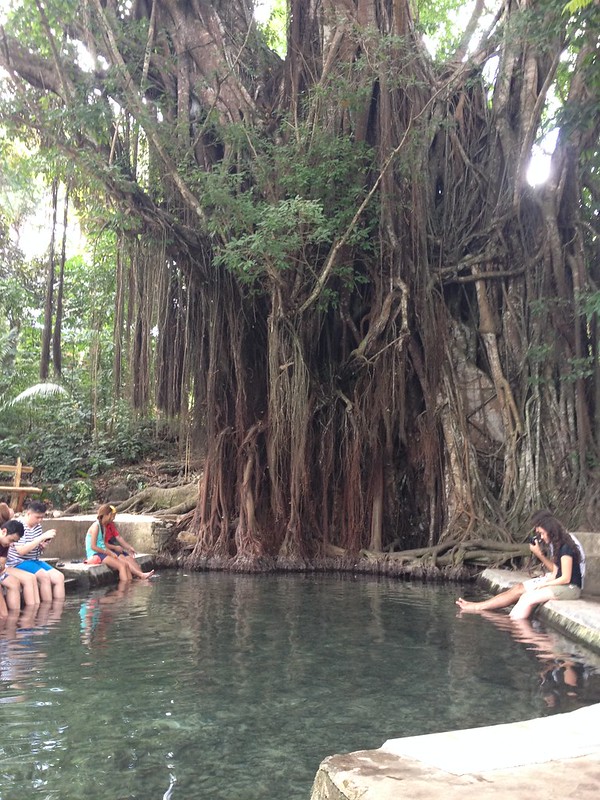 Next stop is the beautiful Cambugahay Waterfalls. There is no fee but you need to pay the parking fee for all vehicle. 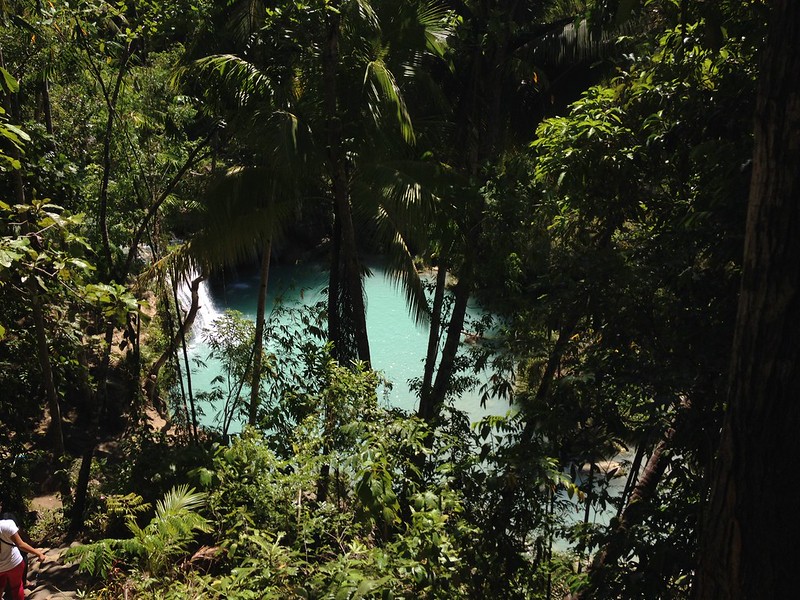 We can already see the very blue waters. 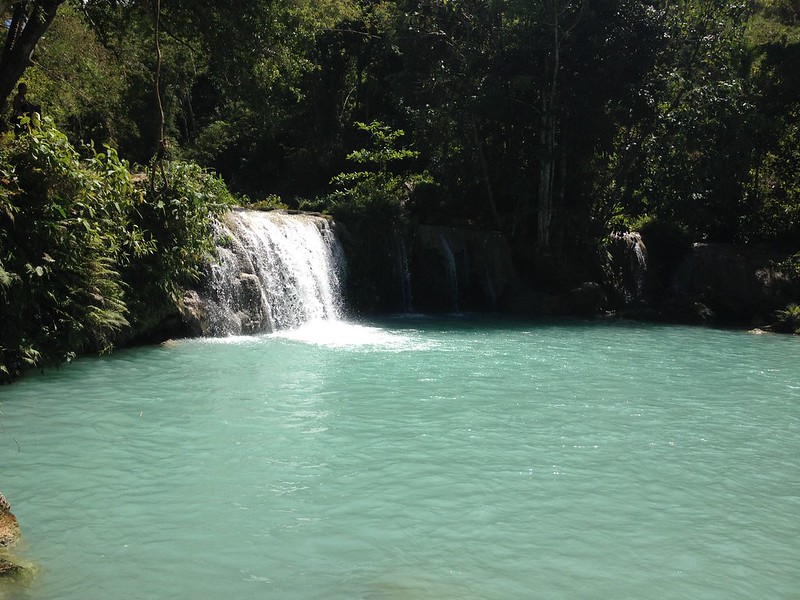 Very very blue. Everybody or the boys took their sweet time swimming here, while me and my friend were just chatting and catching up. There are no cottages or places for rent to leave your things. 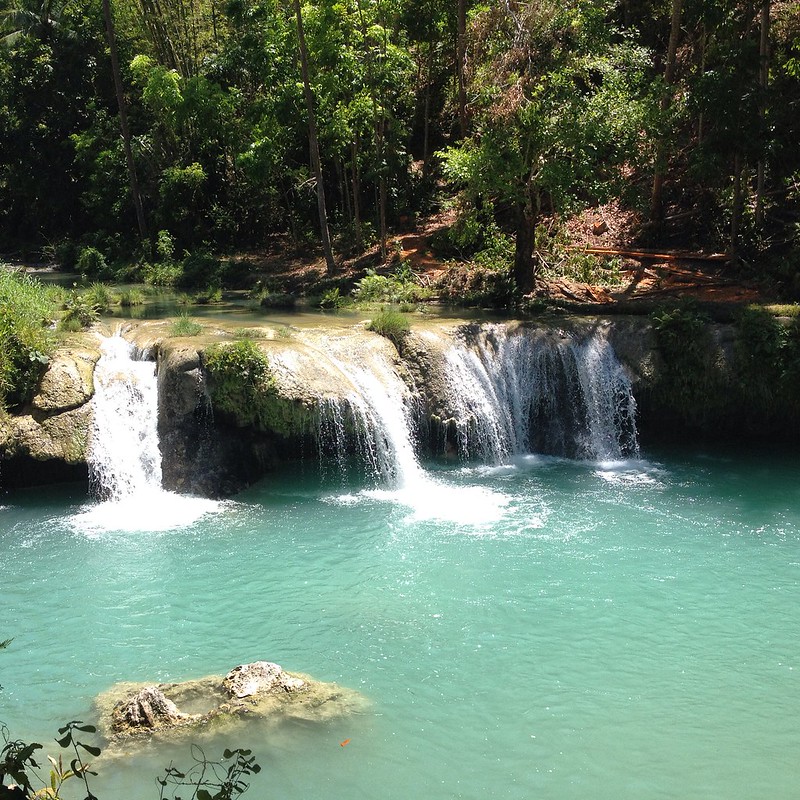 An hour or so later, after we convinced everybody to move, most were getting hungry, we arrived to Salagdoong Beach.

I think we paid about 25 pesos each, to get in and you can rent a cottage if there are available ones. There is also a restaurant but I find them really pricey and the waitress snotty. So if you have your own food, just rent a cottage or two. 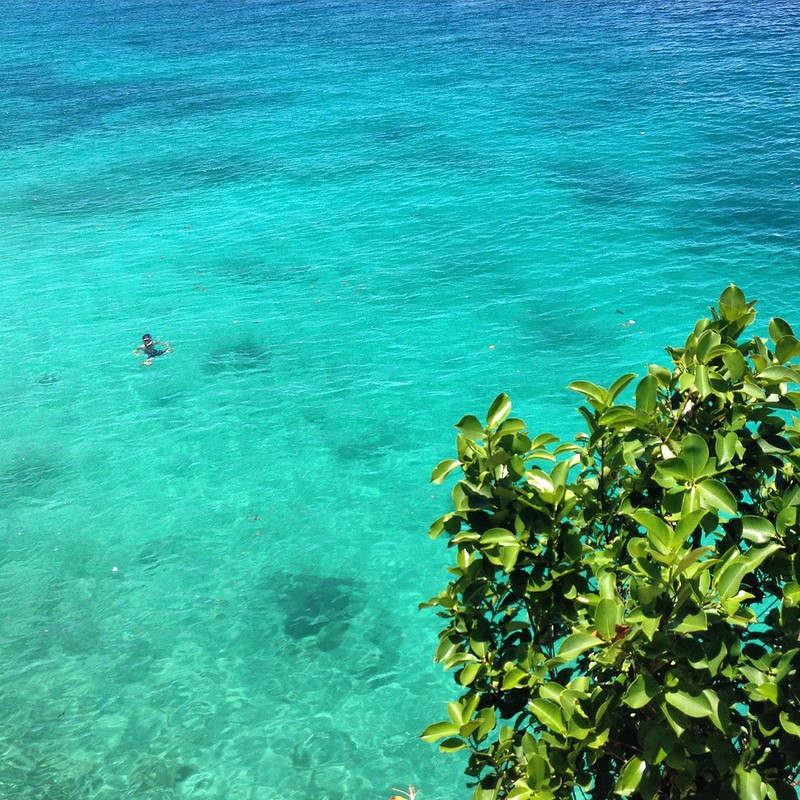 T went to the highest jumping area, and then just jump. It was me who screamed and not the jumper. 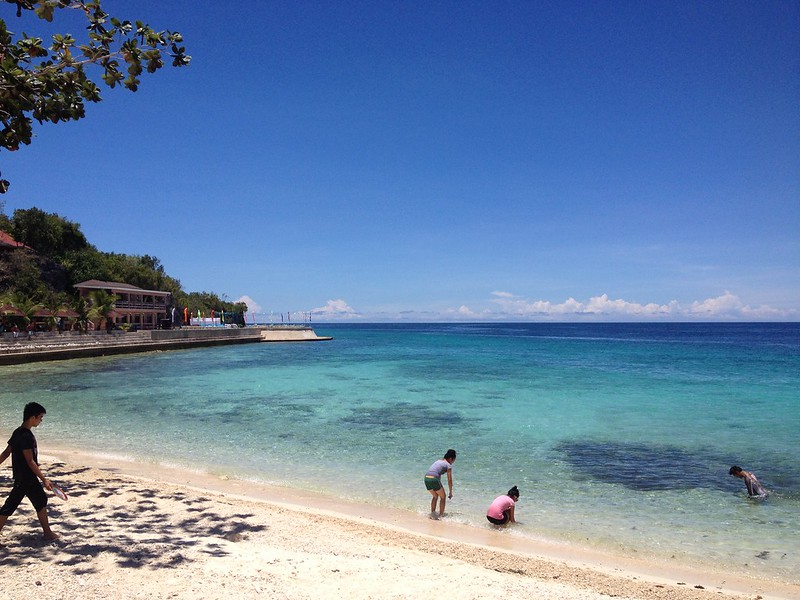 We stayed for most part of the day here. You can also rent a Kayak for 150 pesos/hour. T and my friend had there snorkel so they were out of the water most of the time. By the time we left, everybody have sunburn.

My friend took us to the marine preservation site, free too, but the tide was so low and we found several sea urchin so we decided to call it day and go home. We did found many interesting sea creatures just along the shore.

There are lots of fresh fish and is cheap but unfortunately, the San Juan Market barely had any fresh veggies or fruits. We tried going to the other town of Larena but it was still very expensive.

Majority of the local have their own little farm and use it for there own and the rest of the things they need is bought from Dumaguete City, hence the expensive price.

I was expecting the Island to be abundant with fruits and veggies and more cheaper, but it’s actually more expensive than Cebu.
There are still some areas that are still unexplored and maybe good for snorkeling or diving. So if you plan to visit Siquijor and is staying in one of those apartment-style inn where you can cook, just make sure you get ingredients first in Dumaguete.

After my meeting last Saturday, I decided to take a short walk instead and cross the bridge on foot.  It was a nice sunny day but still cold.

The Sky over the  Tenjin Bridge. This bridge is just one of the few bridges over the Yodo river connecting downtown Osaka to North area of Osaka.

Just could not resist to take this Sunset over at Yodo River from the Bridge.

Some more random pictures during the hike to Mount Ikoma.

The  hand that guides the way.

Guardian of the mountain?

The tree, the sunlight

A panoramic view of Osaka from Mount Ikoma.

A temple in Nukata, Higashi Osaka.

On our way home.

I admit I am addicted to Dr. Who. What can I say I am a geek. So when T sent me a picture of this Blue Daleck , I begged and begged till he gave in. According to T, N actually bought it for me which made me really happy and yes it will say “Exterminate” 😀

T told me that there was also a Sonic Driver and a Tardis, but unfortunately I could not convince him anymore BUT when I got the chance to visit Barnes and Nobles the first thing I looked for were Dr. Who items. And when i found this blue Tardis mug, No question asked, I WANT IT and I GOT IT:)

I have not used it yet  , soon. I did not have enough funds so I decided not get the Sonic Driver 😦 maybe somebody will give it me for Christmas ( hopeful).

Anyways nuff about Dr. Who during our short stroll around Arcata, California I saw a this really beautiful Sunset.