For my summer escapade this year , Miss Y decided to join me in my crazy idea to used the 18 kippu all the way to Matsumoto City.

We met first in Kyobashi station and then catch the 6:14 am train from Osaka Station . 3 hours later we arrived at Nagoya Station. We decided to take a quick stroll around the city and get some much needed breakfast.

Miss Y found Gordo Cafe , an underground cafe near Fushimi Station (Subway). We got there a little before 10 unfortunately, breakfast was already over. 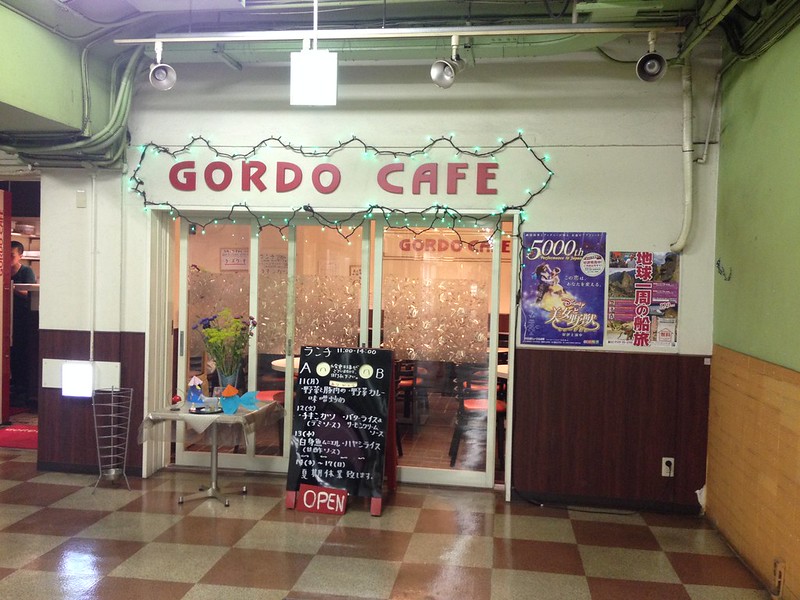 We did not make it to their breakfast time. 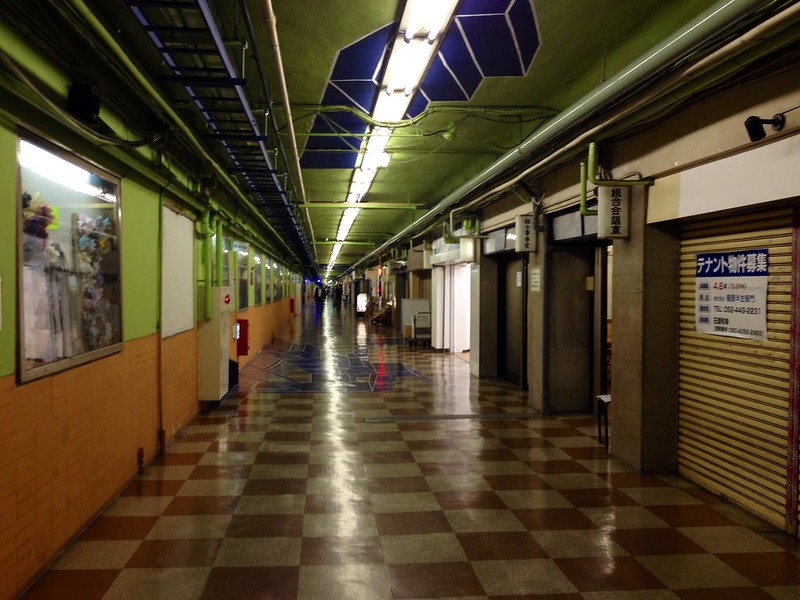 After walking a little bit, we found a little nice cafe run by an old couple. We had some coffee and sandwiches before heading out to Nagoya Castle.

We had a long nice walk to the castle but unfortunately, unlike Osaka Castle where you only pay when you get into the castle itself, you need to pay starting at the outer moat. I have been to Nagoya Castle and even though Miss Y has never been there, we decided to pass it this time. We walked around the parking area to find a nice view and we did albeit a little bit far.

Heading back to our train ride, Miss Y and I decided to get some of the infamous Nagoya’s friend chicken wings(手羽先) 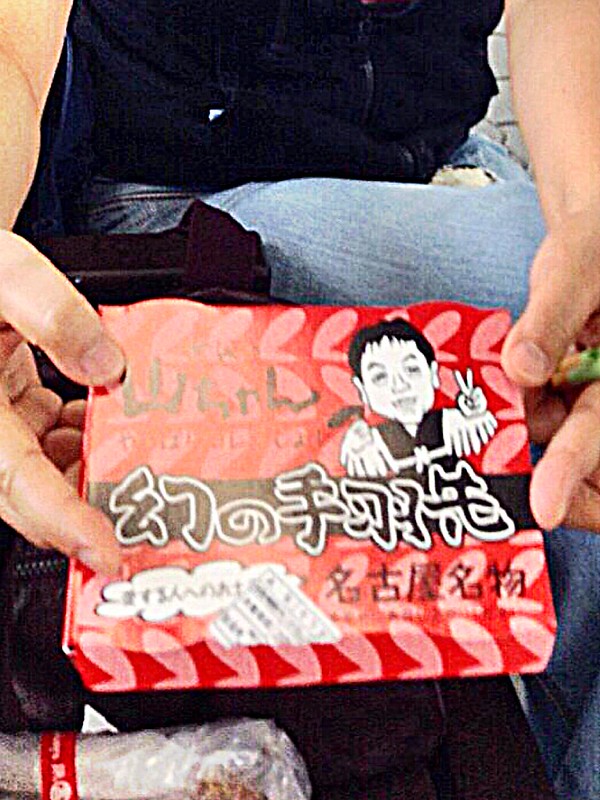 We grab some other fried chicken from other store, get into the train station found the spot at the end of the platform, ate our lunch while waiting for our train.

By the time the train finally arrived, Y and I were full and ready for our sleep 🙂

Yes, you probably think I’m crazy but that was how long it took me to get to my destination last winter break. Of course I was using the Seishun 18 ticket, so basically I can only use the trains that does not require any extra fee, mostly local on this trip.

I had no regrets though, it was a very scenic and relaxing train ride. I passed several prefectures before finally arriving to my final destination.

The train finally arrived in Kamo(加茂) Station in Kyoto Prefecture that will take all the way to Kameyama(亀山) Station, Mie Prefecture.

Going deeper to the mountain area of Mie Prefecture , everything was blanketed in snow.

Even the rail tracks were covered in snow

The train to Kameyama was a one-manned train and only 2 cars. The train ride was about an hour and 30 minutes and had to wait in Kameyama Station for 24 minutes for the next train to Nagoya.

The train to Nagoya was slowly filled up with people as we pass along the Mie Prefecture so I did not have much room to move around the train to take some picture. It was still scenic though but no snow. The ride was about an hour and 20 minutes and had to wait about 7 minutes for the my next train to Gifu and then change again to another train for Minoota Station(美濃太田)

While going to Minoota, I noticed that some of the stations are unmanned, just like the way to Takeda. Passengers need to pay at front of the train directly to the driver based on where you get on.

The ride to Minoota was only 30 minutes but unfortunately, the train was late for about 20 minutes. I have to wait for 82 minutes in Minoota for the last train transfer so it was not that bad. I did not find any convenience store or any cheap places to eat like Yoshinoya or Matsuya, fortunately though the hotel in front of the station have a lunch buffet for 1200 yen including drinks so I ate the much needed sustenance and have coffee.

One station away to my final stop, the train have to wait for the Limited express train for about 20 minutes. Had a few minutes to walk around and enjoy the view. Can you figure out where I’m going now? 🙂

Panoramic View around the station.

I arrived about 40 minutes late than my original ETA but it was okay. Oh and yes I am in snowy Takayama City , Gifu Prefecture.

Shinkansen or Bullet trains are fast and can take you from destination A to B but it does not have any views compared to the local train ride. It does need a lot of patience though and correct timing to connect your train or it will be another hour or two before the next train especially if you are crossing one Prefecture to the next. BUT if you have time, it is definitely worth a try.

Stitch. Yup just like any other girl, I love stitch but I don’t collect stuff toys cause they are dust collectors :). I receive a stitch stuff toy as a birthday present last year from 2 girls I used to work with in Tokyo and from my cousin too but I don’t really buy them.

When it comes to key chain or cellphone accessories , I think Japan have a wide and cutest variety in the world 🙂 but it was just 2 years ago that I found out they also have stitch key/cellphone accessories in every prefecture.  It’s small and can easily be put away, so I don’t have to worry about dust.

Here are some of what I have collected so far.

Stictch and the Tokyo Tower 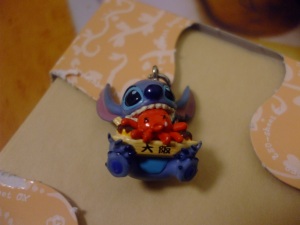 Stitch and the legendary dragon of Enoshima (Kanagawa)

Stitch and Natto in Ibaraki 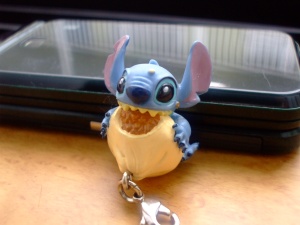 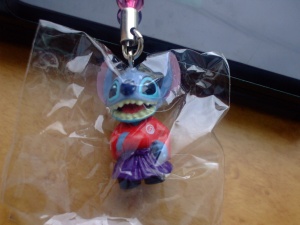 Stitch as Sakamoto Ryoma in Kouchi

Although I have never been to Kouchi yet, but I can’t refuse a gift can’t I? 🙂 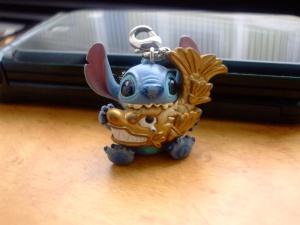 Stitch in eating odango in Okayama

There are some places that I have been to but don’t have a stitch key chain yet, like Hiroshima, Hirakata, Beppu, Ehime , Nagano, Iwakuni and so on…

When I picked up the Nagoya Tour guide at the Station, it said there that you should never miss the Nagoya Tonkatsu. It was right, it was just sooo good.

I think I had this in one of their big department store there.  Refer to this  Tonkatsu Ranking (Japanese)

The Castle ( Side View )