As I mentioned in my other post, there are two building or facility that has some weird design in Maishma, this one is the Incineration plant.

It burns garbage from Osaka City, Yao City and Matsuhara City. Tour here is more famous than the Sludge Center and the facility are more tour-friendly too.

Again the tour itself is in Japanese but you can request English and I think Chinese audio when you make your reservations. 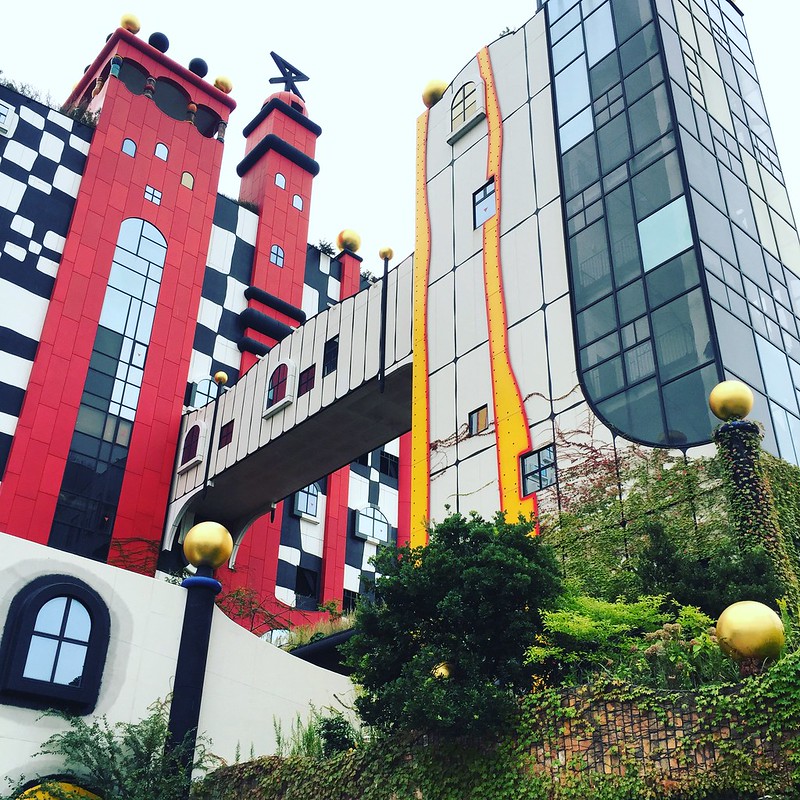 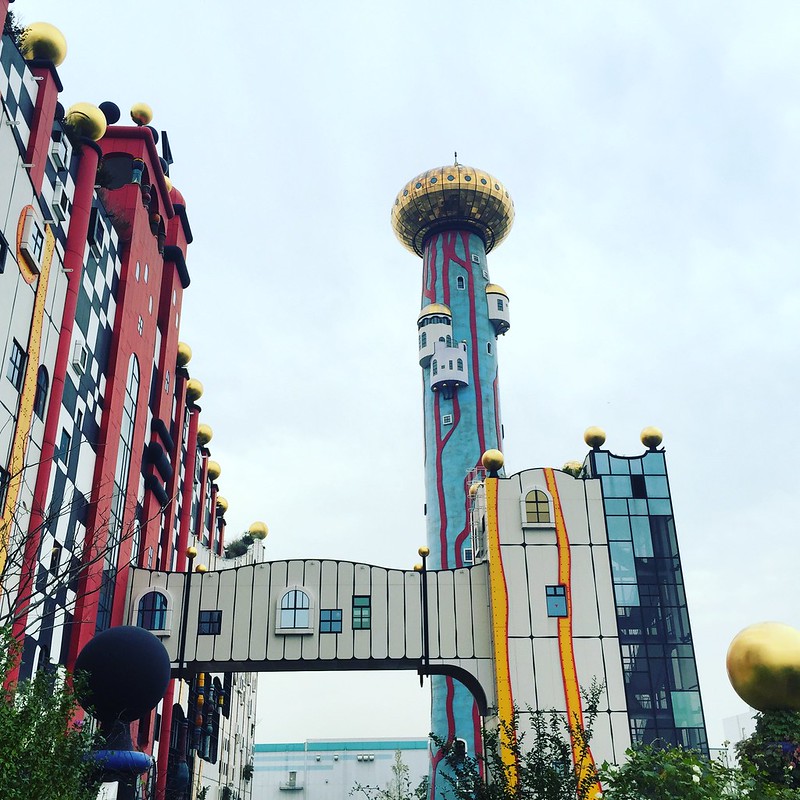 With the tower. Inside the tower are 4 big exhaust pipes. 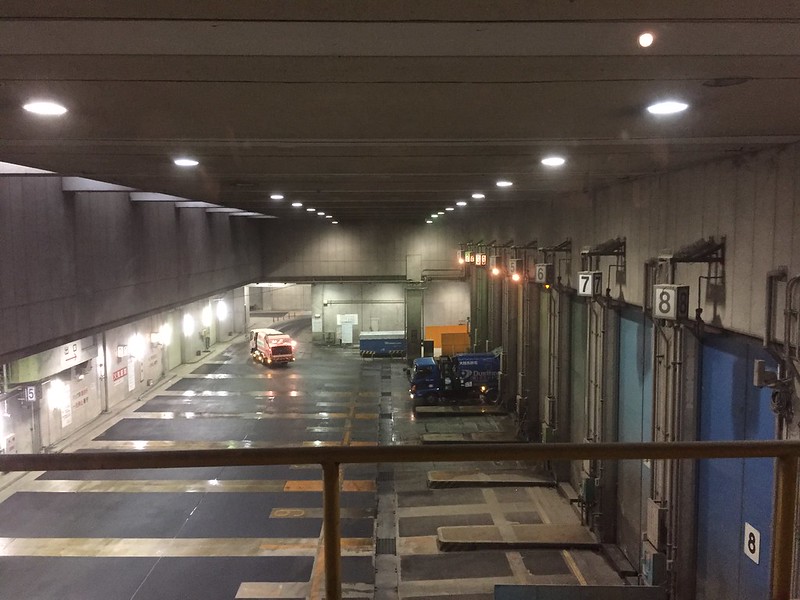 Unloading area for the garbage. 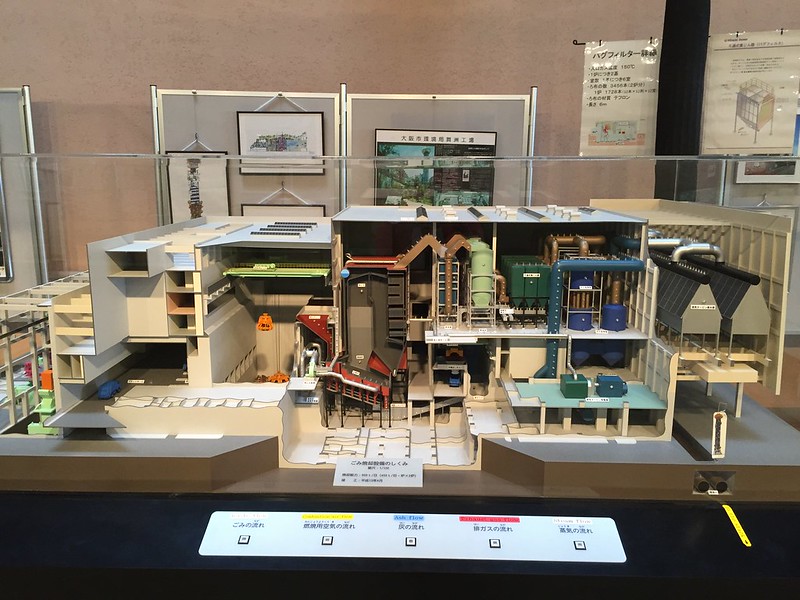 A miniature version of the inner part of the facility. 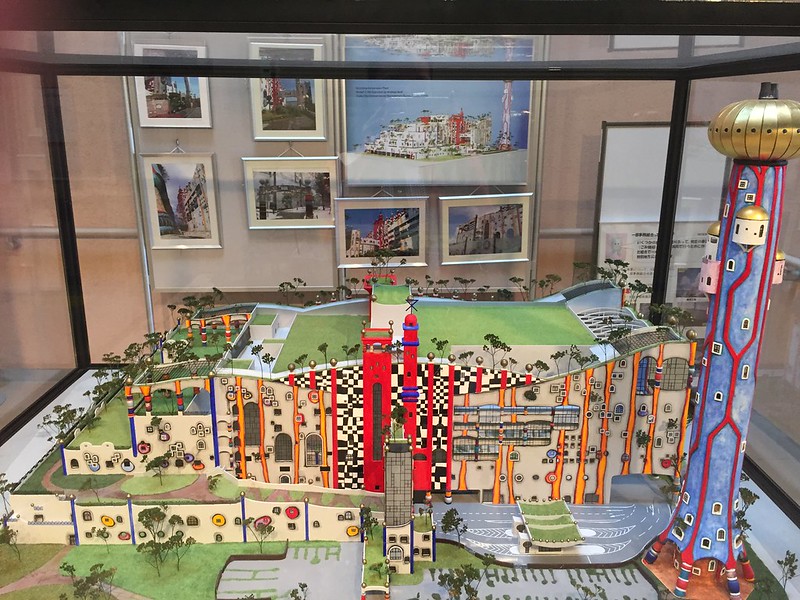 A miniature version of whole facility. 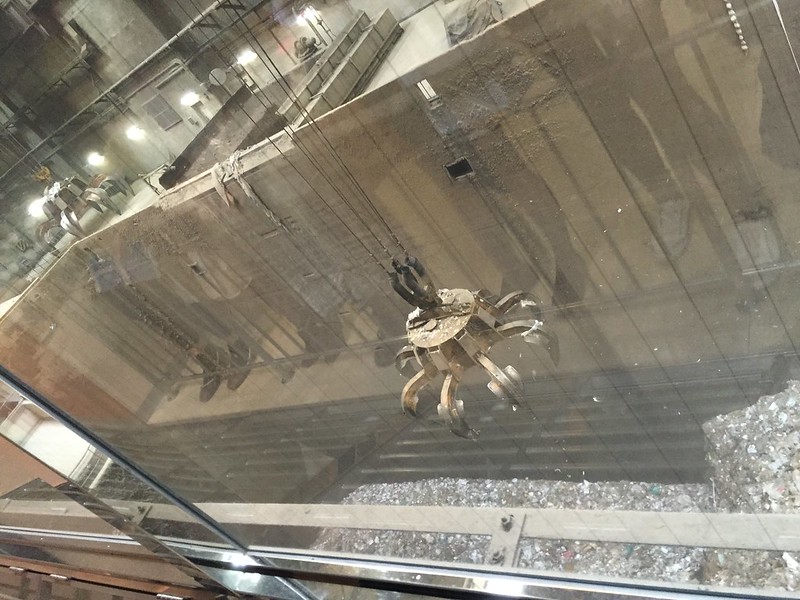 The “garbage picker”. The facility have 2 incinerator which can burn up to 450 tons of garbage in day so that would 900 tons/day. 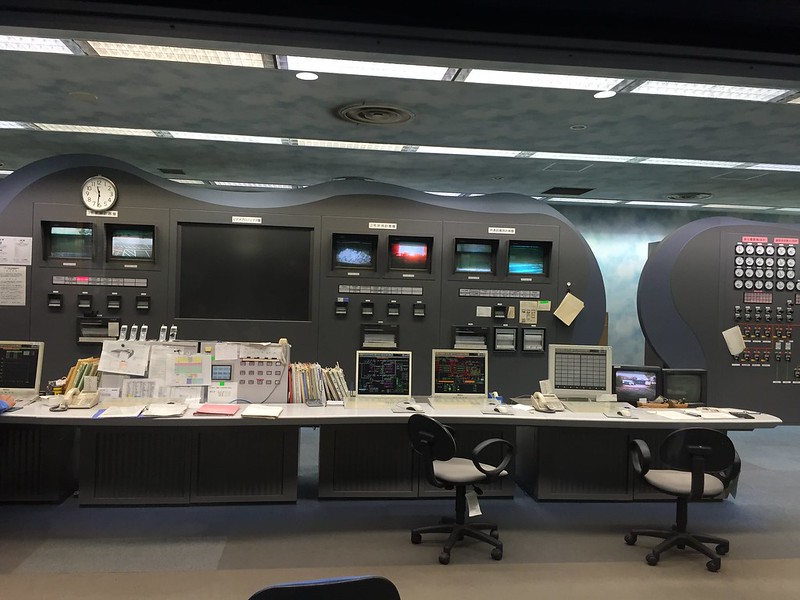 The office and monitoring area. 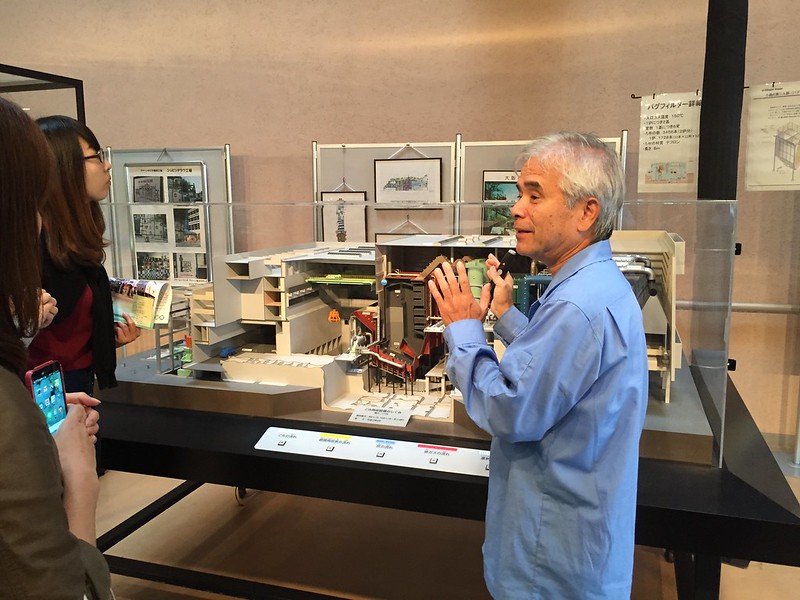 Our guide explaining to us how the garbage are being incinerated.

It is an amazing facility. People asked why would you go there? Why not? I think it is vital how our rubbish are being disposed and how our tax money are being used. The facility operates 24 hours but other than the smell of the incoming garbage trucks, there is no smell at all. The air filtering system is amazing.

Also the facility does not use any gas, oil to burn the garbage. It uses a sort of air combustion technique . They also use Thermal recycling meaning no energy is going to waste. The heat from the boiler rooms are utilized for floor heating, water, gas reheating and for preventing explosion in the hammer crusher. The same energy is also used for power up the plants operation on a daily basis and the remaining power is transmitted back to the local power company.

Details on how to make reservations are here(sorry only Japanese).

If you have been to Kansai International Airport in Japan, you might have noticed two very distinct towers along the way.

One is color blue and that is what I’m going to blog about.

This building was designed by the late Friedensreich Hundertwasser.

So what is this building?

This is actually Osaka’s water recycling facility for underground water. Thus the color blue, it is suppose to represent water.

Touring the facility is free but requires a reservation. Tour is mostly done in Japanese but you can ask an English audio guide during the reservation

Let’s take a tour of the facility. 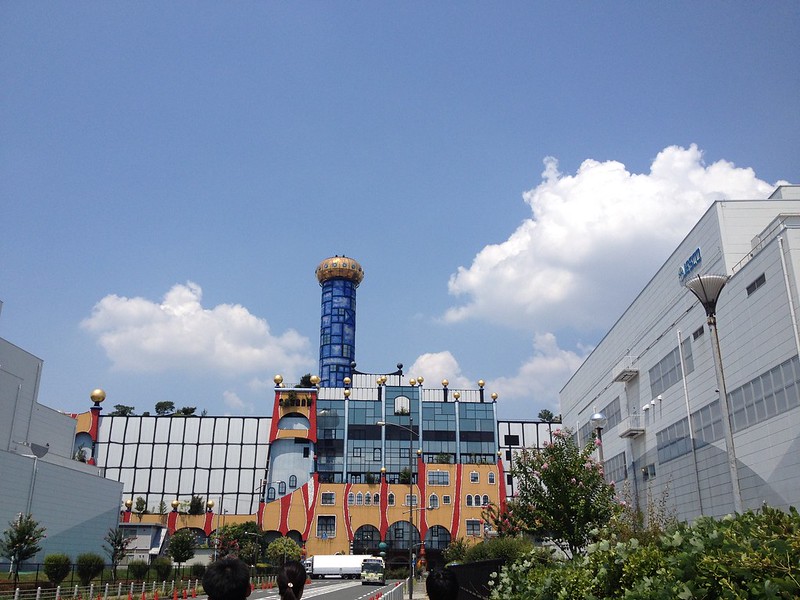 A wall painting of the facility 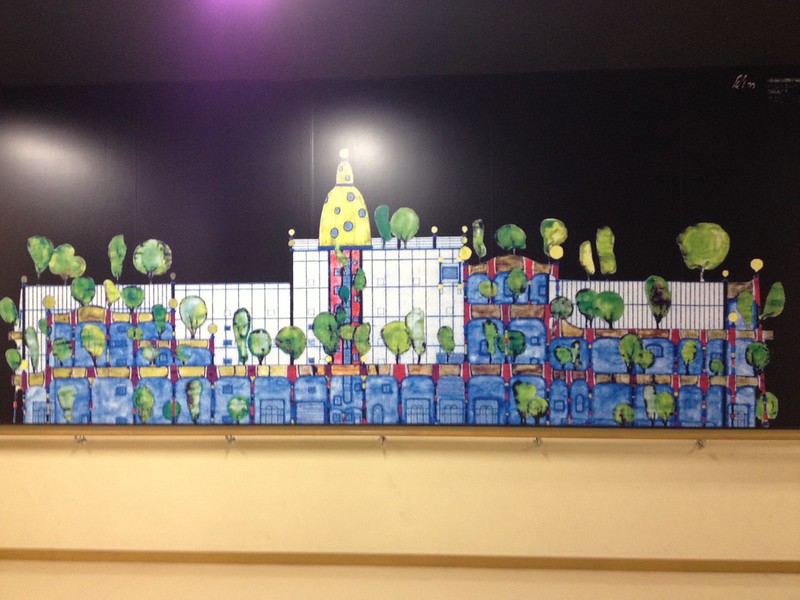 The staff working so hard :p. 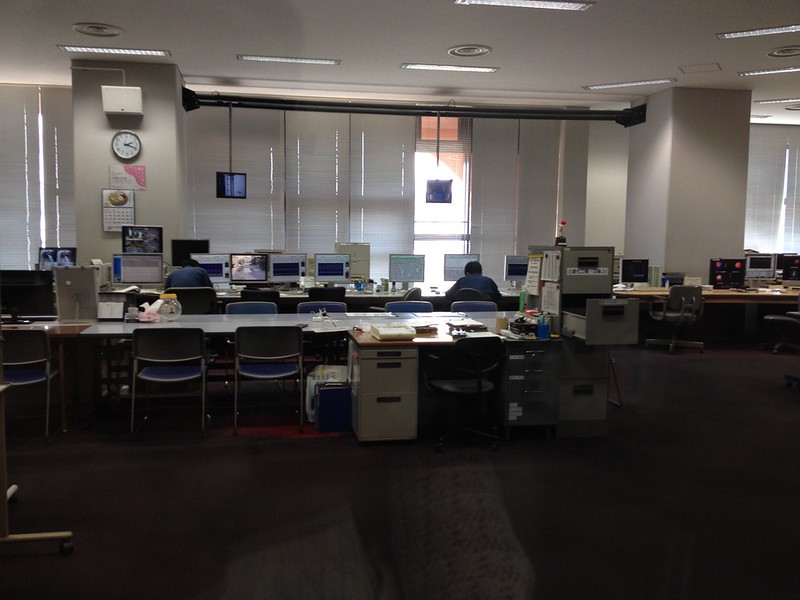 The tour was only within the building but the weather was really nice and we had a really nice tour guide that he decided to take us all the way to the rooftop and show us around there too.

A view from the rooftop. 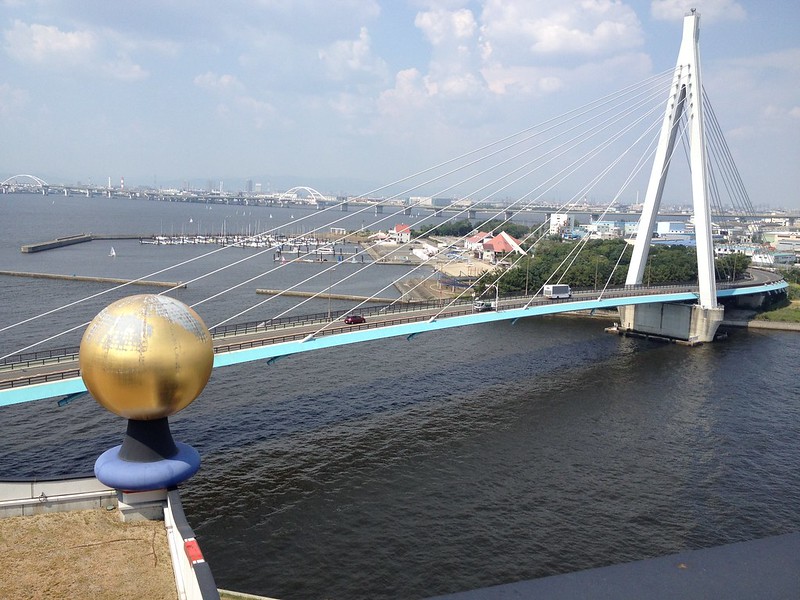 This tower actually contains 4 or was it 6 exhaust pipe. 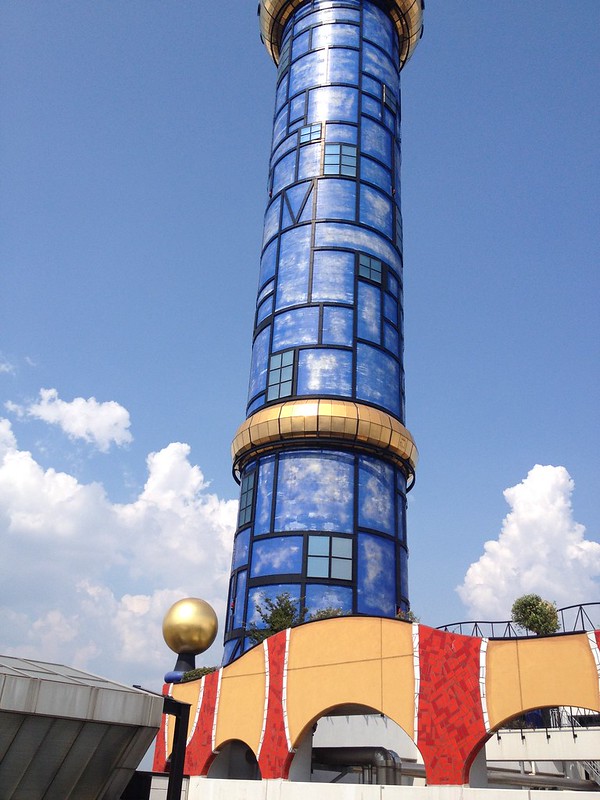 After walking around the rooftop we went down on the base of the tower and continued our tour there. I’m not sure if this is still part of the official tour but hey I’m not complaining.

A storage area for the Sludge. 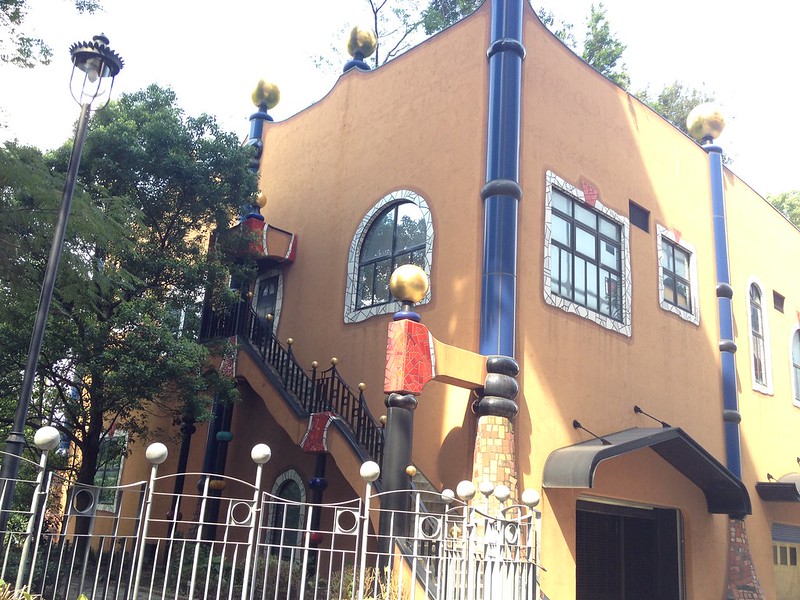 The base of the blue tower. 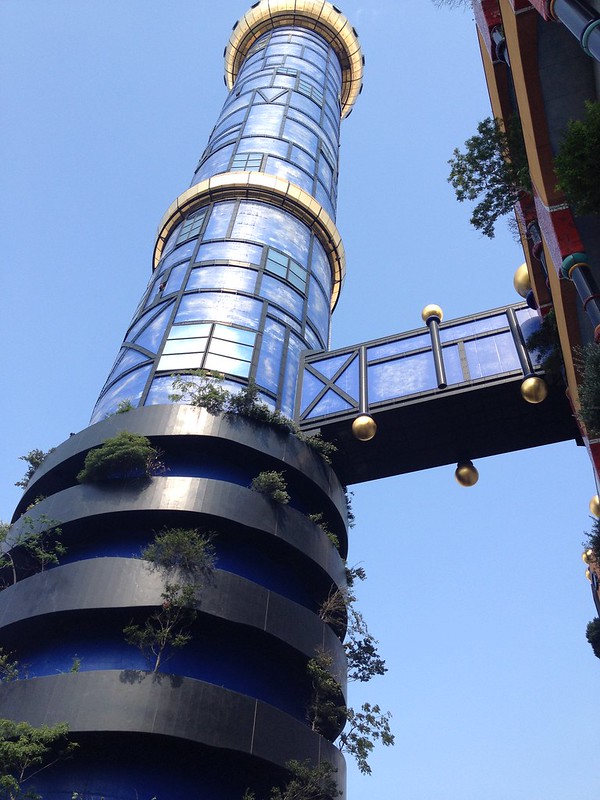 The back area of the facility. 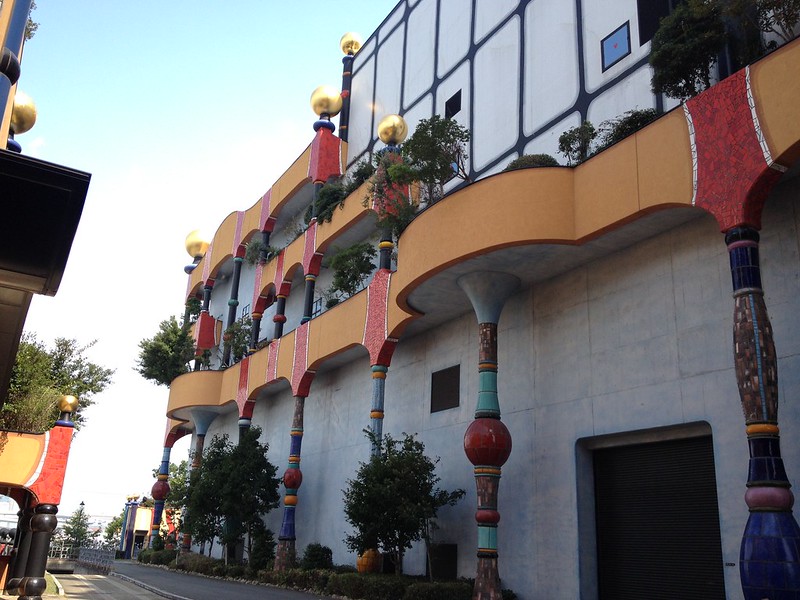 This facility only recycles Underground water for Osaka City not Osaka Prefecture.

The by product are now being research to be used for pot making but some are actually used as construction material so nothing is thrown away.

It was really a very educational tour around this facility.

If you live in Osaka City, this is where your monthly payment goes for underground water treatment and of course your tax.

When I found out about the new Lily Park in Maishima, Osaka , I suggested another meetup activity for it. I think I posted the event early May and by last Friday there were more than 40 people who registered to the event. Oh my I think this is going to be a challenge. I have never been an event organizer, much less with this kind of participants.

The fateful day came. I was nervous as hell and T kept on saying that I should do this and I should do that. I know that he was right but the stubbornness in me and nervousness was not making me think clearly and could not concentrate :). This is why I can’t be an organizer because I am a scatterbrain :p

When we got to the bus station where we suppose to meet with the participants, there was a very long line of people, all were going to the same destination. This is not starting so well. We planned to get on the 11:08 am bus but looking at the line, I don’t think we could fit into it. We need a separate bus just for us. A little bit of talking and we decided to move to the next area where we could catch a bus to the park. The plan was if there was a long line then we can just take a taxi or walk to the park.

Unfortunately when we got there the line was longer. The taxi line was also getting longer and since the area is not really a residential section, basically it was the back of Universal Studio Japan, there were no taxi. You have to specifically call them to get there. I was lost. We tried getting information from the JR staff but they were not very helpful and just told us they don’t know.

We checked our google map and it kept on giving us a different direction. It kept giving us the long way which is 7.9 KM away, where in fact we were just about 3 KM away from the park. It seems the application does not have data if it can cross the bridge or not. Finally one of the participants J, offered to check the bridge since he has his bicycle with him. While J was checking if  there was a footpath on the bridge, we were having a discussion on some alternative if we can’t cross the bridge. A few minutes later, J called and said we can all cross it. The alternative plan was scratch and everybody was ok to walk. So we walked. One decided to go home though.

The walk turned out to be one of the most exciting part of the day. Everybody was chatting and just talking and having fun. Even the shy ones where slowly opening up and talking with everybody. Some even told me not to worry too much and do not need to make everybody happy, she said that they are  old enough to make decision to enjoy the moment or not. That really help me and put me at ease, but still I was still in doubt if we ever get to our destination.

As I was walking with T again, I looked and noticed that she was right.  Everybody was doing their own thing. Some are even waving at some of cars and saying hello as we were crossing the bridge. The real organizer/owner of the group was also there helping me and giving me support so I was slowly calming down a bit.

A few minutes later we arrived at Maishima Arena and found a convenience store. We decided to take a short break to grab some drinks and snack and sit down for a bit. Finally when everybody got their fill we finally proceed to the park. It took about 10 minutes more to the lilies and we finally made it.

Some of the determined participants of this event. Some disappeared when we took the picture I think they were excited to check out the Lilies.

It’s time to check the park and the lilies 🙂

The fields of pink lilies 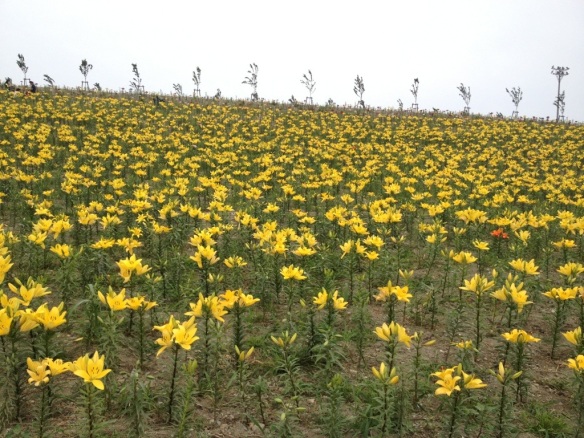 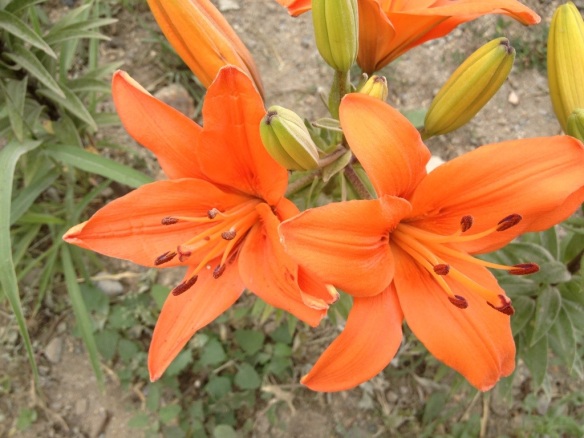 The park was near the sea and the day was not so hot so it was just a good day for  stroll along the flower fields.

Our next challenge was to get back to the train station. At this stage, everybody was already tired and was not willing to walk anymore. I was still okay though. We decided to leave the park before 3 , but I think the park’s guest were thinking of the same thing, when we got to the bus stop there was already a very long line.  The city bus decided to add additional bus that will leave every 20 minutes instead of the regular 40 minutes interval. We finally got on the 3rd bus, and the rest of the group got on the 4th bus, 20 minutes later.

You would think that the day would be over, but alas it was not. During our little discussion on some alternative things to do, I mentioned about the Belgian Beer Festival in Osaka and after a long walk, most wanted to grab a drink or two. So basically majority of us ended at the Beer festival. BUT since the festival was expensive the group decided to just hang out on top on new JR Osaka station. Some decided to go home or get some late dinner but I think almost half of the group was there just chatting and relaxing while we were recapping the days event.

Around 6 Pm, it was starting to get nippy and so we decided to go home.  It was a rewarding day for me. I still have a long way to go as an organizer but slowly I will be good at it ( I hope) and of course this day would not be successful if not for the participants itself. I was just so lucky to organize just a cool group.

Till the next meetup adventure. More picture uploaded by some participants can be found here.