This was one the amazing finds during my hike yesterday, which will be in another post.

Why Rock Ship? The Kanji Iwa(磐) means rock or a big boulder of rock and Fune(船) means ship or boat thus the title.  The idea came when RT, our guide yesterday, explained to me that it was believed that these big boulder of rocks where the ship in which the gods used to get to earth.

A little google and I found the official homepage for this place. [Japanese][English]

The Japanese site contains a more details description, unfortunately it’s going to take me a few days to do a translation of it. The English site contains some basic information which will give you some idea how old this place is. 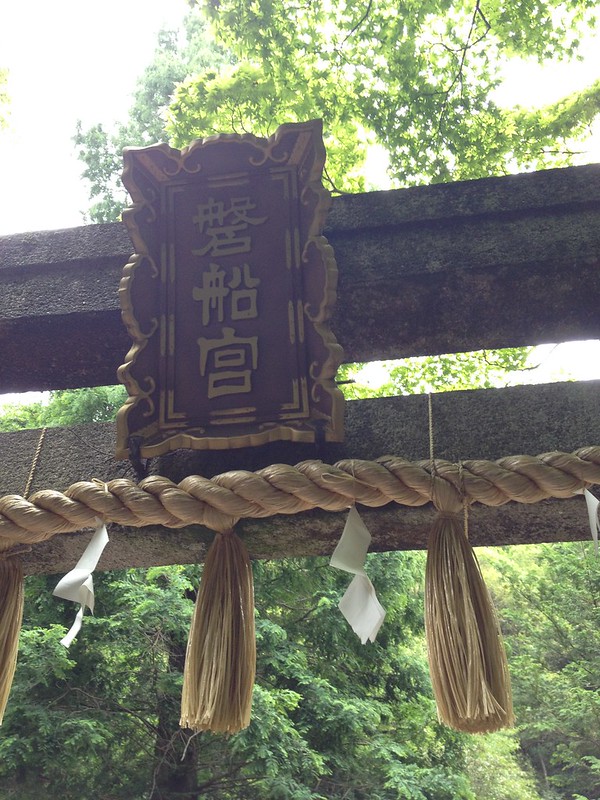 The name at the gate of the Shrine 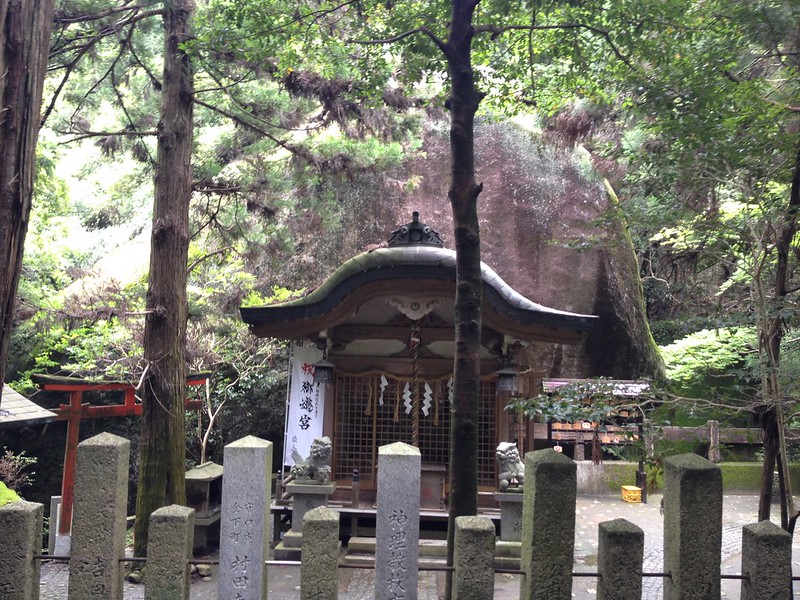 The front shine. Notice the Big boulder of rock in the back of it? It is believed that the god(神) lives in this rock, 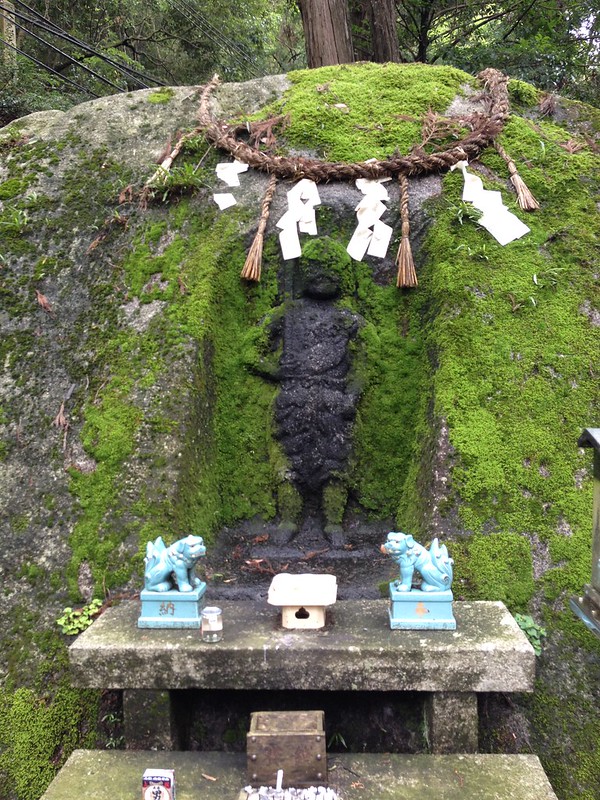 Fudoh-Mouoh, considered to be one of the divine beings in Buddhism and this image was carved in the stone in Dec 1545, more than 400 years of history. 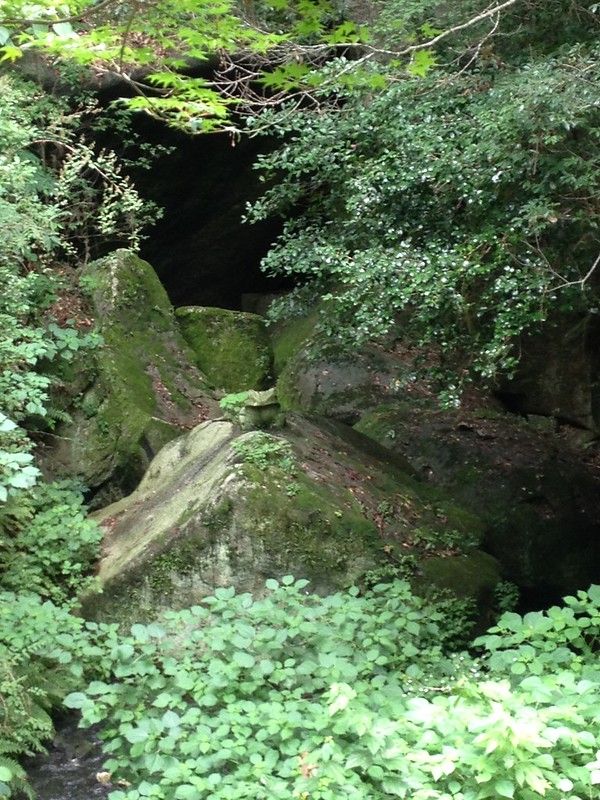 Can you see the frog on top of the Rock? It’s supposed to be a holy creature, a guardian perhaps?

The Shrine is small but full of history. We were planning to go done and explore underneath the boulders but unfortunately it has been raining these past days and the rocks are slippery so for safety reason, they have closed it. So now I have another reason to go back there soon.

Going into the shrine is free but if you plan to go down under the rocks, you need to pay a small fee.

How to get there by Train:

By Keihan Train: Take the Keihan Train to Kisaichi Station(私市) , and get on the Keihan Bus and get off at Iwafune Jinja Mae. This bus only operates on the weekends(Sat and Sun) only.

By Kintetsu Line: Get off at Ikoma Station and Take the bus bound for Kitadahara(北田原) and get off at the last stop from there it’s about 10 minutes walk to the shrine.

If you are going by Car you can take a look at this map.

What could be better in Summer than a shaved frozen mango

I finally drag T with me last Sunday to go look for this suspension bridge or commonly known as 星田ブランコ(Hoshida Buranko). The website said that the nearest station is Kisachi Station (私市駅) but in some hiking website, it said that it is also possible to go from JR Hoshida Station. I could not find a decent map to the place and when I tried to look for it a few weeks back, I got rained on and got lost. So my next plan was to drag T to help me look for it.

We got to Hoshida Station past noon and tried to look for a decent map of the place, the only one we could find is this.

Unfortunately though, we can’t take this with us since its mounted on the wall :p

As we were figuring out how to get there, another old lady was also asking directions from the station master for location and when she overheard us , she asked to come along.  To make the story short, we ended up going together. I was able to get us at the intersection of Myokuenguchi but from there we were not sure how to proceed. While T was trying to figure out the map, she decided to asked some of the residents crossing the streets. A very nice old lady told us a short direction but it took us into the residential area and nowhere near our goal.

K-san, the old lady’s name found another resident and was able to get us a guide. We were all amaze that the father let his son go and guide us all the way to the temple area, where we are supposed to go to start the trail. Half-way through the temple , there was another local resident, a retired teacher of a local school where the boy go. When we got out of the trail, the boy told us that it was the farthest he could take us. We thanked him and he immediately ran off.

Our next guide was the retired teacher, another very nice old lady. She was actually with her family and they were visiting a local fair which was along the same trail that we were supposed to go to. We also checked out the fair but unfortunately it was already 2PM and most of the food stalls where already empty so we said our thank you and good byes and continued on.

Another 20 minutes or so later, we finally reached our destination.

The bridge was about 300M (I think) and it was amazing especially with all the autumn colors in its background.

Time to cross it.

when we crossed the bridge, we decided to go on and take the train from Kisaichi Station. On our way down we found a wall climbing area too.

I really wanted to try it, but I was not wearing a stretchable jeans and I’ve kids for competition too 🙂 but definitely next time.

We continued our way down and when we reached the parking area at the foot of the mountain we thought we are almost near the station. We were all surprised to find out that the nearest station is about 2 -3 KM away, so we have to walk at least 20 minutes to get there.

We finally found the train and got home safely. K-san was with us the whole time and we said our goodbyes when we got off at our train stop and she continued on.

It was a Sunday well spent.

Katano City is another City of located at the Eastern side of Osaka Prefecture. It’s interesting to note that the flag symbol in the middle of the manhole is actually a combination of the character for Peace (平和) and Sakura ( Cherry Blossom) in a form of a dove. The upper left side shows the Sakura as the City’s Tree , the lower portion is Azalea, the City’s flower and the bird is a common pheasant , the city’s symbol for bird.