When a dear friend invited me to her friend’s Rakugo , I was very happy. The price was also discounted, later found out that the seats assigned to us where the one which are normally does not sell, the farthest corner of the hall.

The artist was Katsura, Shunchou and it was his 20th Anniversary as a story teller. I thought that maybe it will last for only an hour or so, but it lasted more than 4 hours and during that period, I laughed , cried and was moved by the emotion he put into the story telling.

The second part of storytelling was about a letter or lyrics that a father once wrote and was found by his son after his death. Instead of just reading it, Katsura-san decided to sing it for us.

The title : 手紙～親愛なる子供たちへ(A Letter – A Parents Love for a Child).

There are lots of emotional part of the lyrics but my dear friend who is a parent could not hold it any longer and was sniffing and sobbing beside me.

During the part where it says: ” When I could no longer stand up or tie my shoes.. please Lend me your hand.” The tears just decided to come out and would not stop.

By the end of the song, my friend and I were a mess.

The third story was about Ertuğrul Fırkateyni, a Turkish ship which was caught by a storm at the coast of Wakayama Prefecture around 1890 . The boat sank but 69 survivors where rescued and nurse back to health by the resident of the island. The 69 sailors were safely returned to Turkey and vowed that this kindness will never be forgotten.

This promised was fulfilled during the Iran Crisis in 1985, when 200 Japanese were rescued by Turkey and was safely brought back home.

I don’t know why, but this story made me cry. I guess I was so moved by a 100 year-old promise that was kept.

To be moved liked this, Katsura-san is a really good story teller. I guess you will not stay in this business for 20 years if you don’t have talent.

It was definitely a nice afternoon spent with friends and tears :).

Have you ever been to a Rakugo? How was it?

Ever since I saw this post in Uncovering Japan, I have been planning to go and try it. Finally the day arrived.

Nishijin Textile is located in Kyoto, looks like any other office building but as soon as you step inside, you will be taken to the world of wonderfully designed Kimono.

The Free Kimono Show is schedule every 45-50 minutes starting from ten in the morning till four in the afternoon. 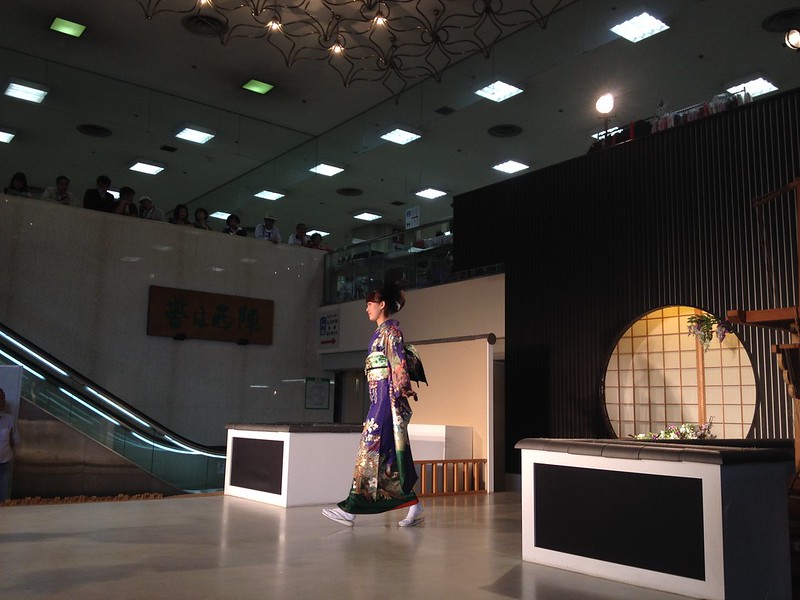 We got there just as the show was starting. 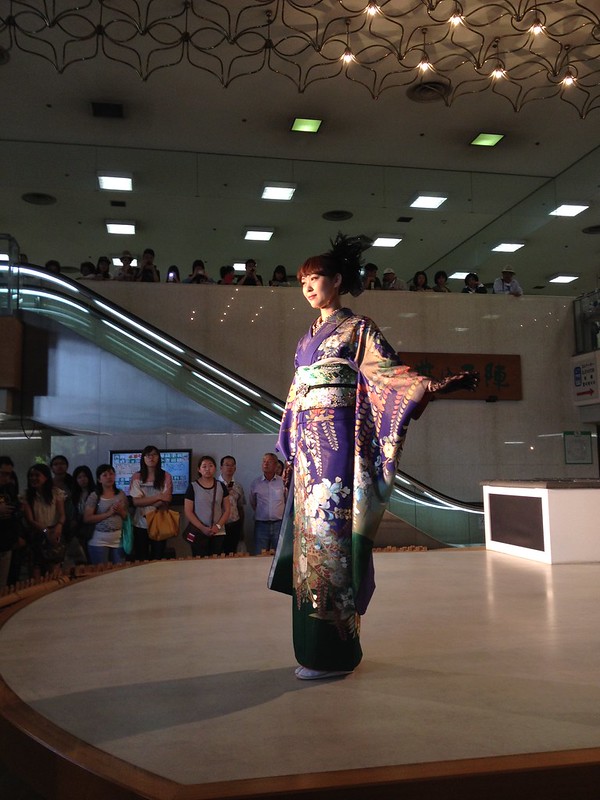 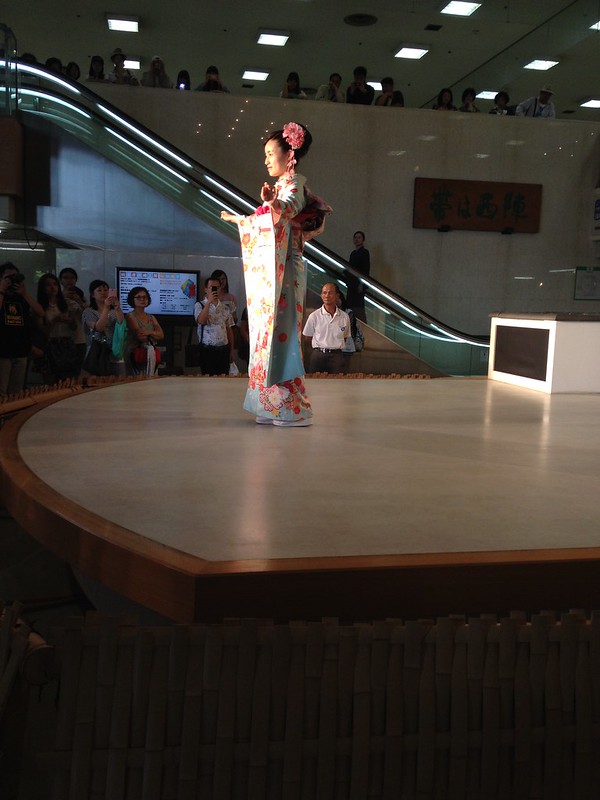 We did not finish the show since we got called by the staff. Time to do some weaving :). 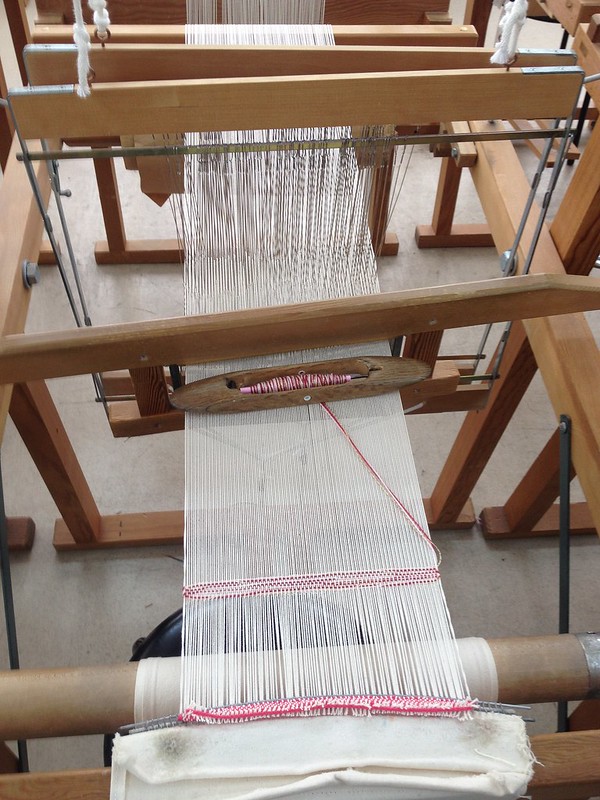 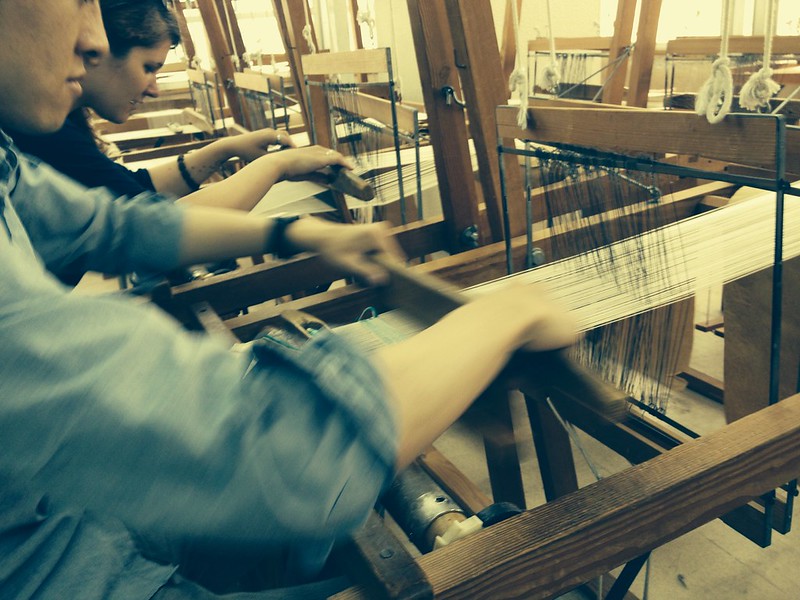 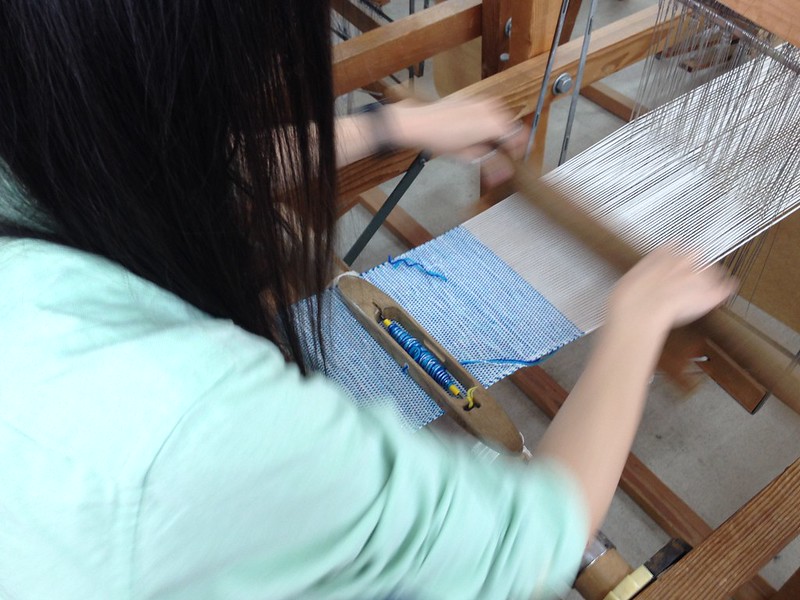 Yes, we are making a simple, small table center. 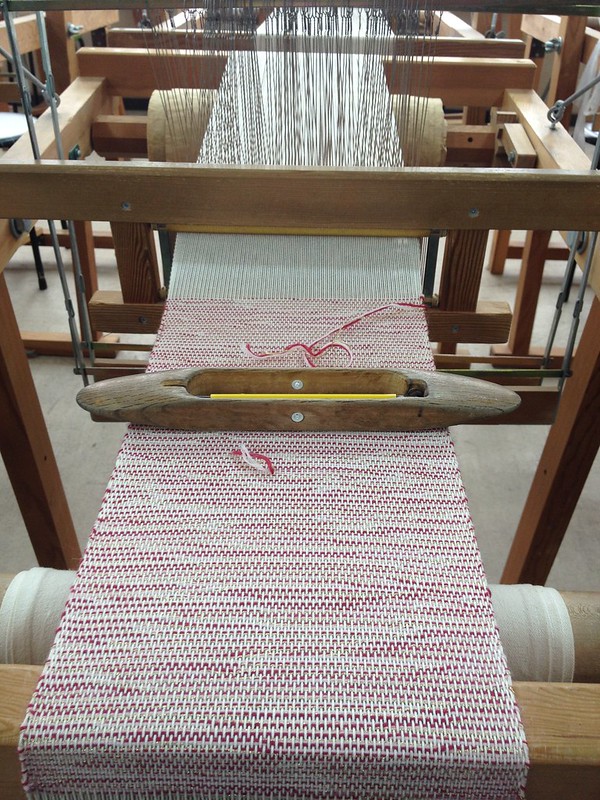 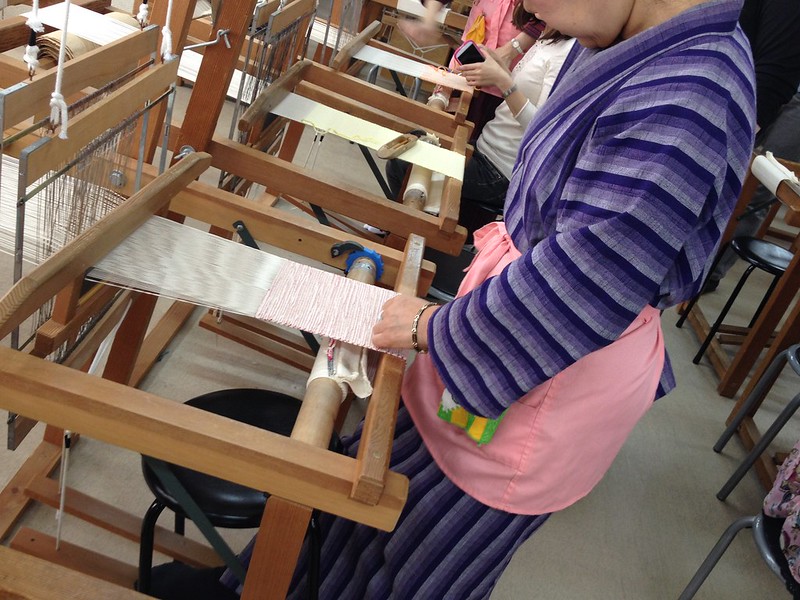 The Nishijin Staff, putting some glue and finishing my table center piece. 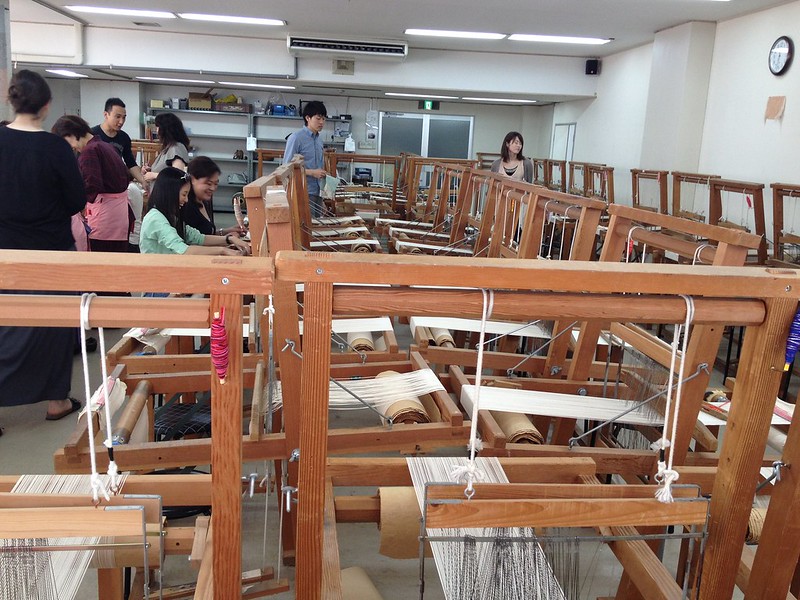 Lots of mini-looms. I think there are about 80 looms in the room. These looms are used only for weaving introduction.

We went back to the main building were the shop is located and where you can see some of the weavers while working. 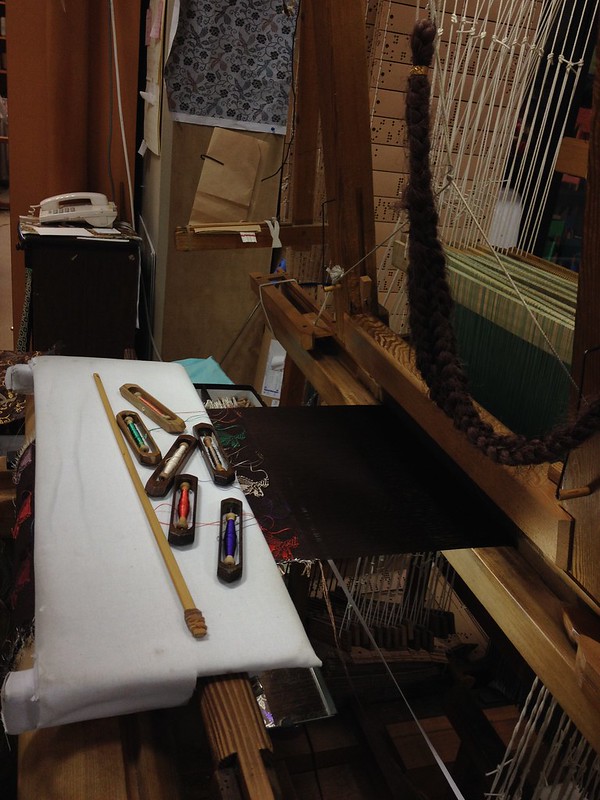 Just to show that in one master piece, it will take more than just one thread.

There was a girl there working in this huge canvass , unfortunately no pictures allowed while she is working. When she saw us, she came and show us her nails, they were very uneven.

There are also hand made products, beautiful and expensive in the shop. A great gift or souvenir from a place called Kyoto.

Hand weaving requires some advance reservation and cost 1800 yen for each person.

It was just another day in the office in Tokyo, when a small tremor occurred. My co-workers and I stopped and looked at each other and went back to our work when it stopped. Then all of a sudden, one of the biggest earthquake hit the Land of the Rising Sun: Japan.

I remember somebody shouted to hid under our table, while one of my male co-worker run to a nearby cabinets and tried to prevent it from tumbling down. I remember praying so hard, I do not think I have prayed that hard before.

When the first wave was over, I felt dizzy and giddy as I emerged under my desk. Some people immediately surveyed the damaged in the building. Then another came, this time it was not as shaky as the first. Unbeknownst to us, that Fukushima is about experience the wrath of mother nature.

Before the second wave happened I was already out of the building, I could not stand the shaking anymore. Even though the building was designed to withstand earthquake, and I was only in 5th floor, the shaking was making me more more nervous. At that point, I have no idea the extent the damage the earthquake brought to Japan.

I tried so hard to contact my family at home, my cousin in Saitama and T in Mito but I just could not get a connection. The cafe in front of the office where I was together with some of my co-worker who also decided to come down, was showing some earthquake updates, although they have not shown any video of Fukushima yet. It was not until later that day, in my friends house, did we saw the real damage it did.

When the aftershock was slowly easing a little bit, we decided to go back to the office . Fortunately, internet was still up and I was able to contact some friends in FB who were kind enough to contact my family and assure them that I am ok.

My employer on the other hand did not give a damn about us. Not a single message checking if we are still alive. It was expected from a greedy bastard like them.

My fellow Filipino engineers and I decided to stay together that weekend in case something happened. At least we have each other. That night we joined the rest of the crowd as we walked home to my friends apartment. Each one of us carrying a small ration of food from the office and a protective helmet.

As we were walking home, I was amazed by the crowd. There was no panic. Everybody was walking fast but silent. There were private offices offering there toilet for people who needed them. Some of the convenience store offered some maps and directions, others make sure that customer will not hoard the food and that it will be fairly distributed to customers. As we passed by Akihabara, some of the nearby residents where offering free hot tea. In Ueno, people were patiently lining up for a cab and for those who can’t go home, shared the heat of a small ATM booth.

It was amazing that even in time of disaster, the Japanese people remained calm and orderly and most of all kind.

After 8 hours of walking, we finally reached our destination. Although tired, hungry and shaken of the days event, we remained awake and vigilant as aftershock comes and goes.

Compare to those who were in Fukushima, my experience is nothing. But even after 2 years, the memories are still very vivid.