A long time ago I saw this polka dot designed Pumpkin sculpture facing the sea.

Later I learned that it was a work by Yayoi Kusama located in the island of Naoshima.

My first encounter with Kusama’s work was during an exhibition in Osaka Museum a few years back, then about two years ago in her hometown museum in Matsumoto City.

Last year S and I found a package tour including a round trip ticket using the Kodama Shinkansen and a ticket pass all around Okayama for two days. It also included a one night stay at a hotel in Okayama.

The weather was not that cooperative bu t we still had a good day.

From JR Uno Station, you need to get to Uno Ferry Station which is just a few meters away. There are limited schedule per day so make sure to catch one on time. 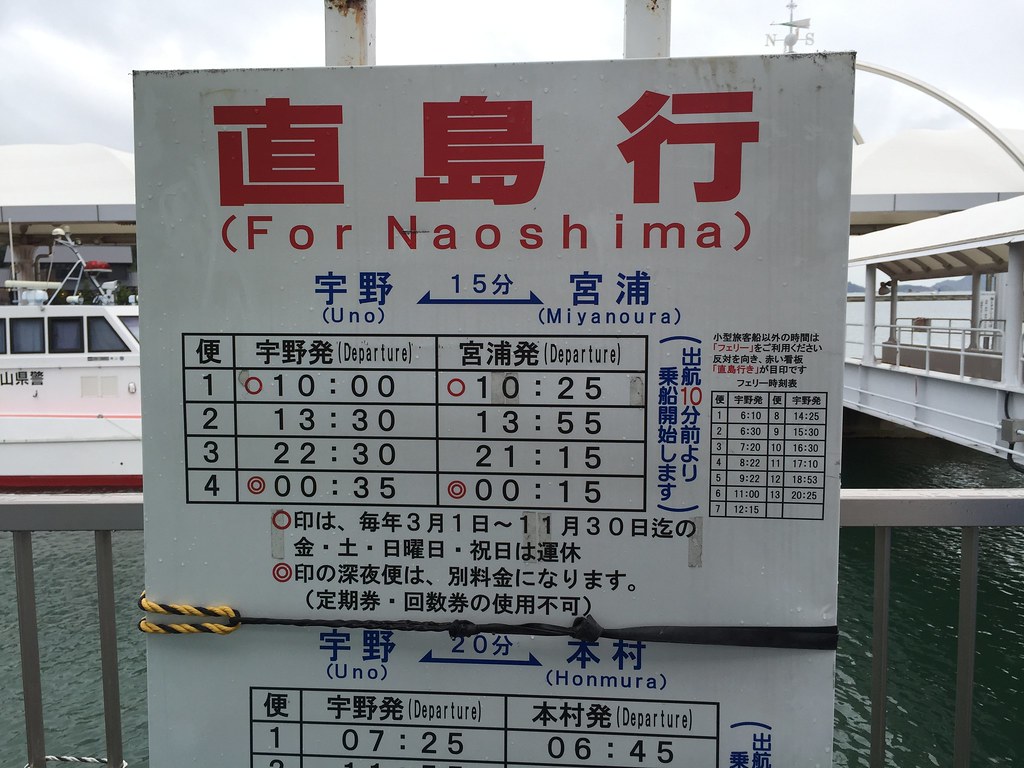 Our ride to Naoshima. 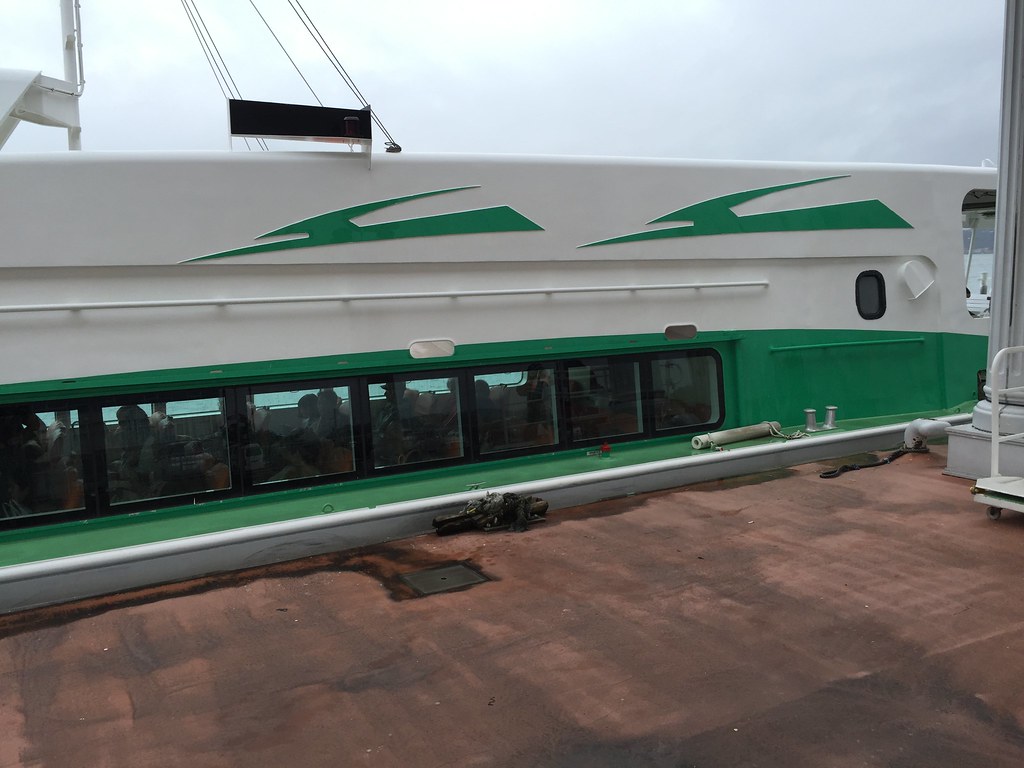 As soon get to the island, you can immediately see the red polka dot pumpkin sculpture. It’s hollow inside , so you can actually get it. No entrance or what not so take your time and as much picture as you want 😀 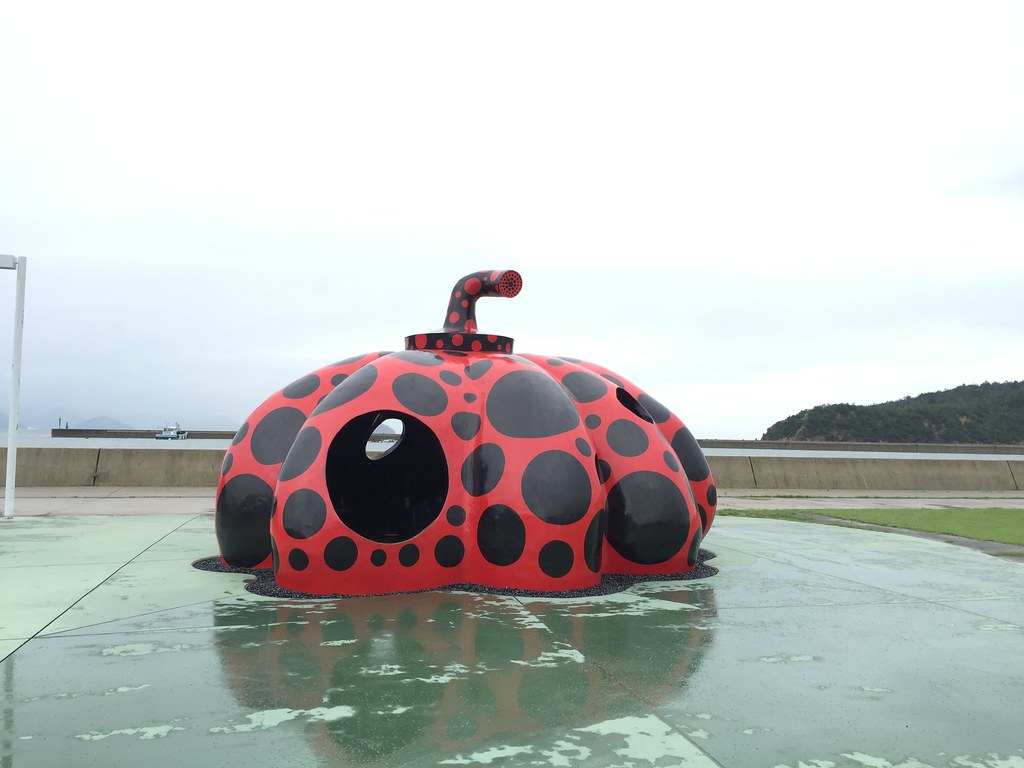 Exploring the island by bicycle would have been great but with a baby and rain, we decided to take one of these polka dot design buses. The buses were bound for the Museum entrance. Which is actually the same area where the yellow polka dot pumpkin that I’ve been meaning to see. From there, you can switch to the free museum shuttle which can take you to Benesse Museum, Chihu Art Museum and etc. 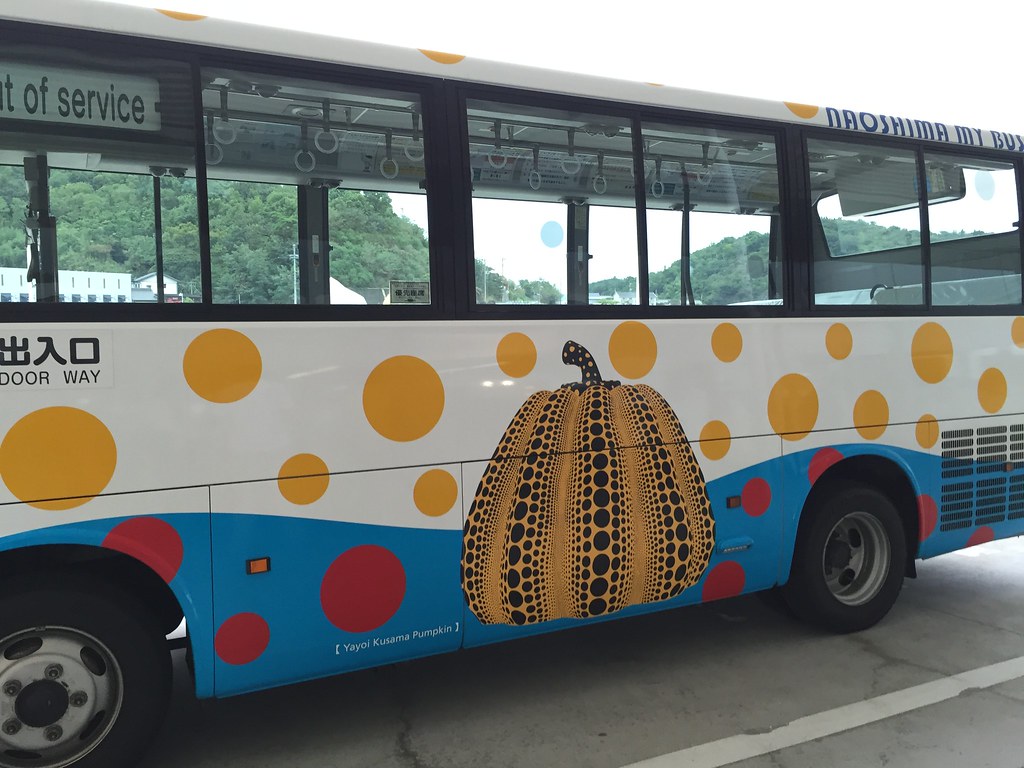 A few minutes later .. Hello there Yellow Pumpkin, how is the view? 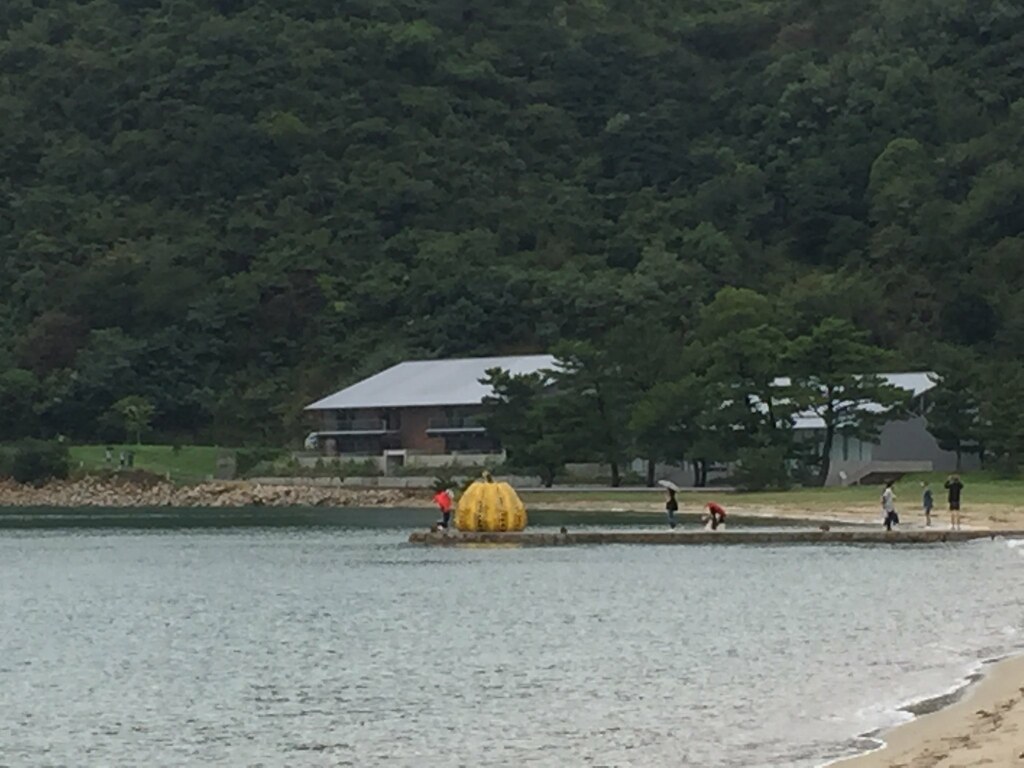 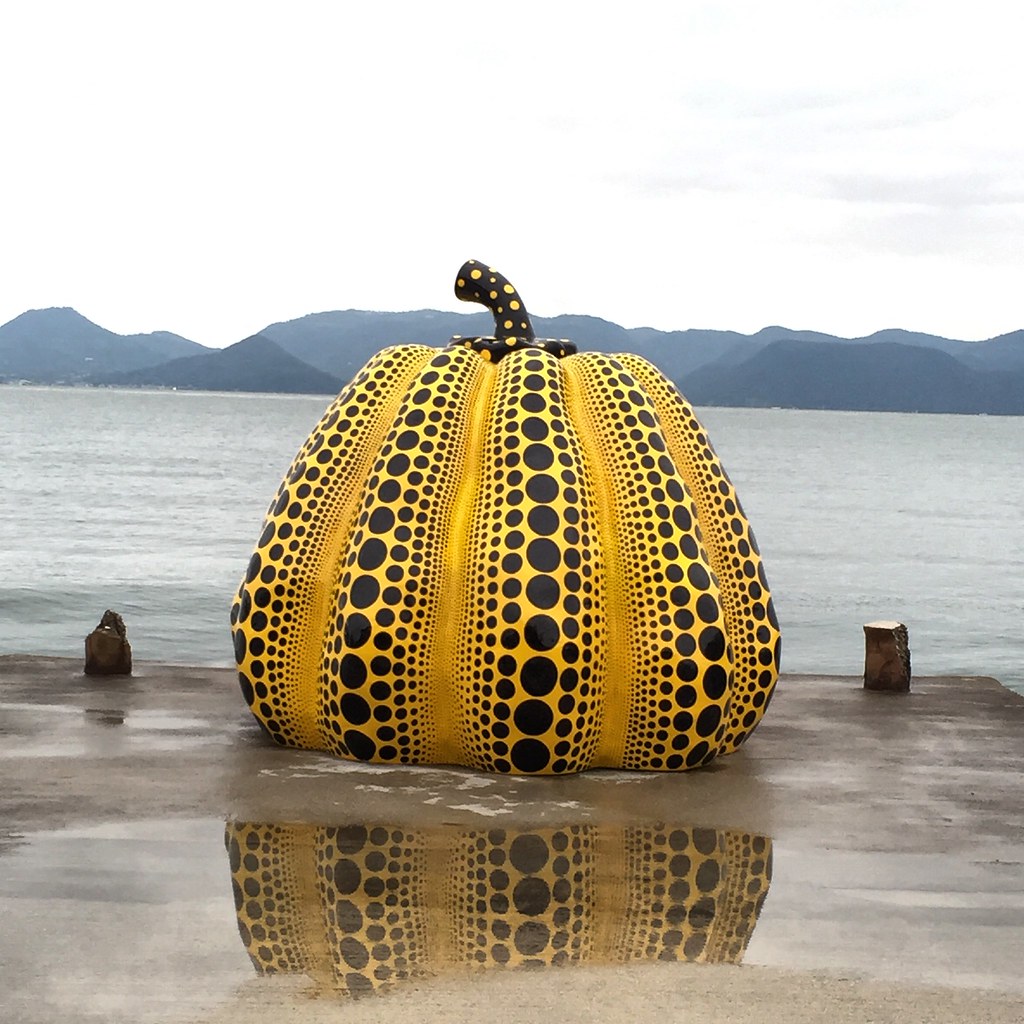 A much much close view.. 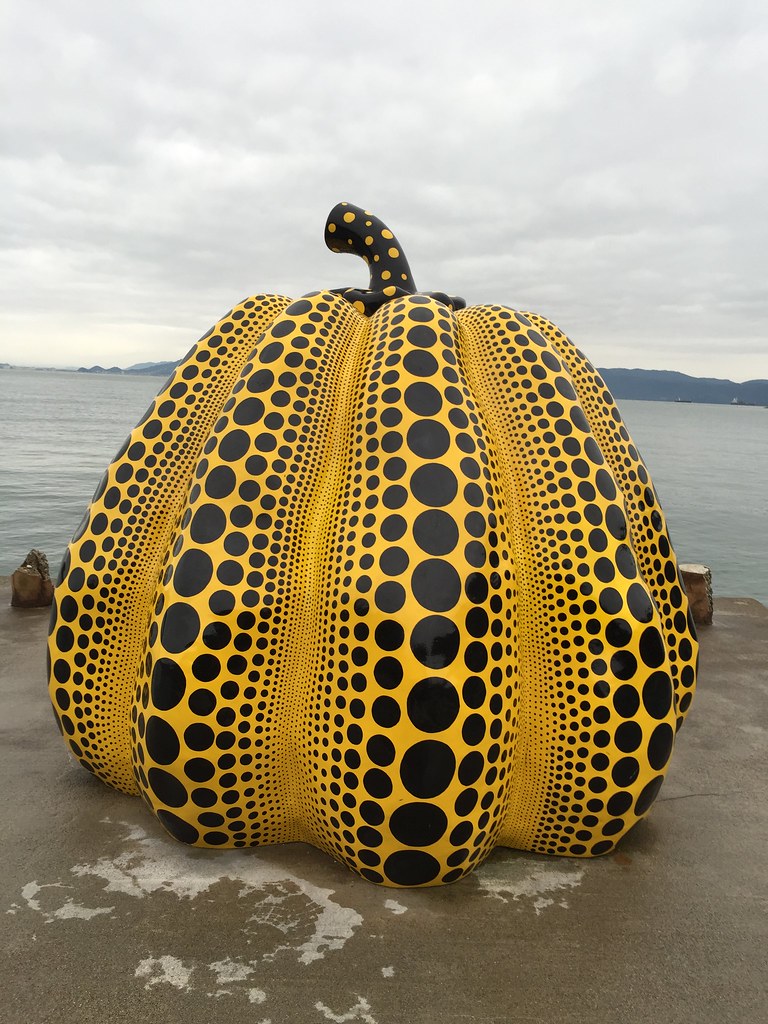 A little bit further up, you can also play with this thingy (No idea what they are but you can move it) 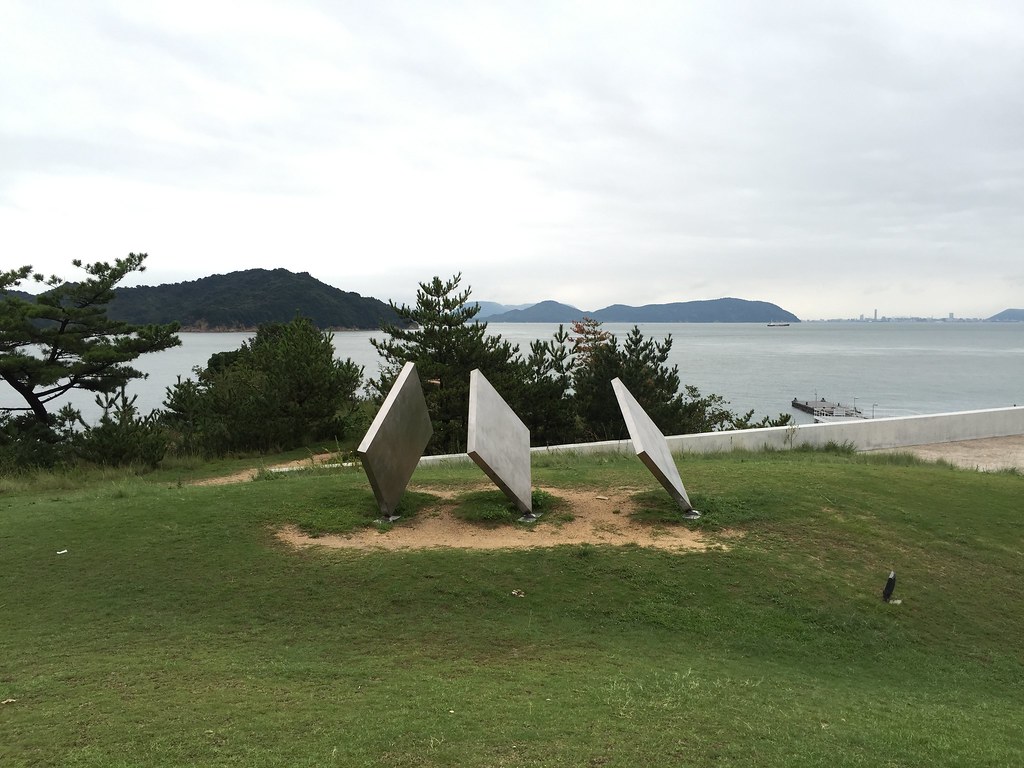 A sort of blue urn , or something 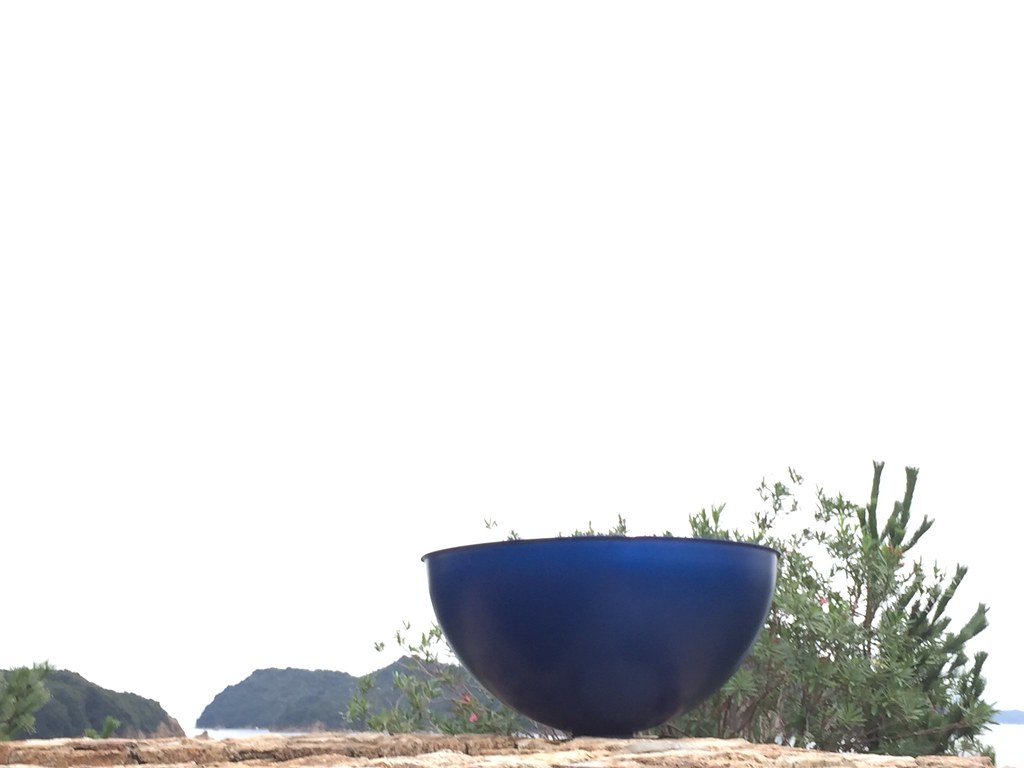 We also visited Benesse Art House , which is both a museum and hotel (I will write a separate post about it. )

It was unfortunate that we were not able to visit some of the cafe nearby and relax or visit the rest of the museums but I met Yellow Pumpkin so I’m happy.

Who knows, maybe I can go back again.

One good thing about working far from home is the free train pass and unlimited train ride between home and work.

So one fine spring day, I took the train to Yamazaki and check out the much talked about Asahi Beer Oyamazaki Villa Museum of Arts.

The main building was built by a wealthy businessman, Shotaro Kaga, and was considered for demolition decades after his death. Fortunately, with the help of local people, the Kyoto government and Asahi Breweries, the Villa was preserved and was opened to the public as Asahi Beer Oyamazaki Villa Museum in 1996. 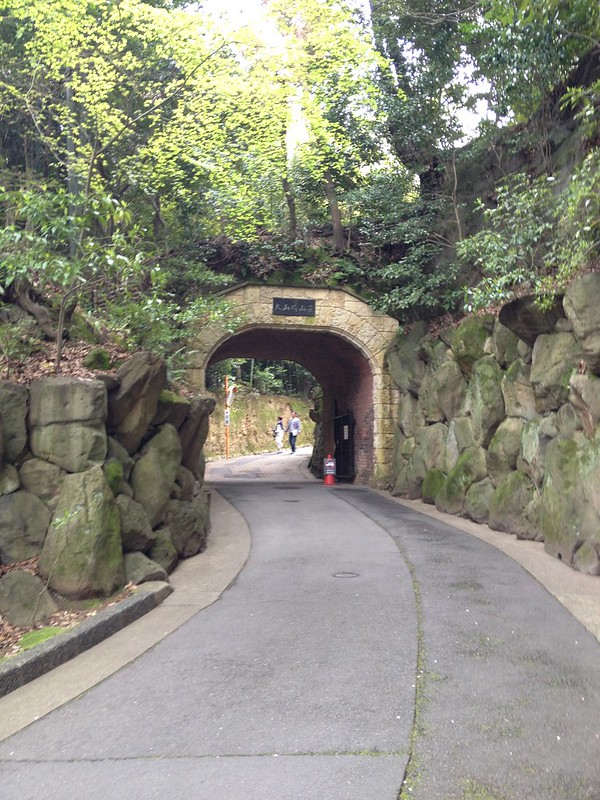 The tunnel going to the Villa. 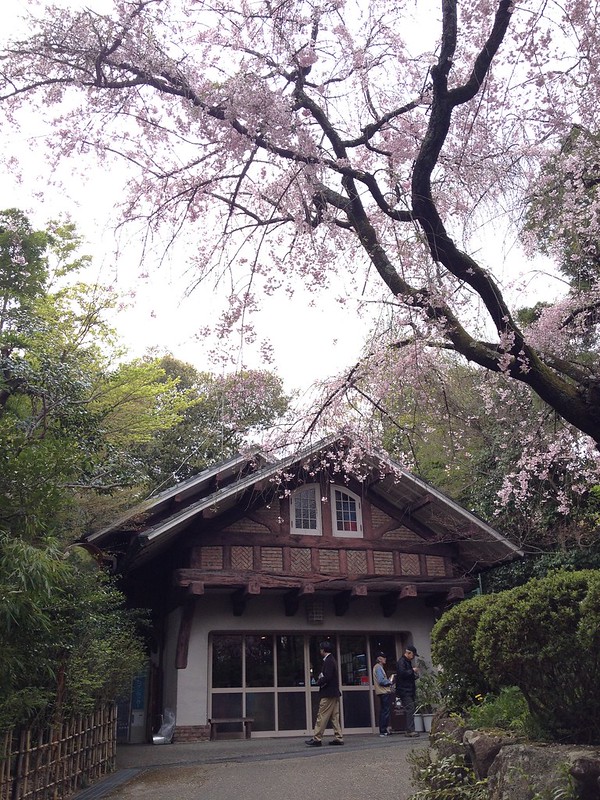 I thought I’ve already reached the Villa, but this turn out to a small resting place and locker to store big backpacks or big luggage since it’s not allowed inside the Museum. 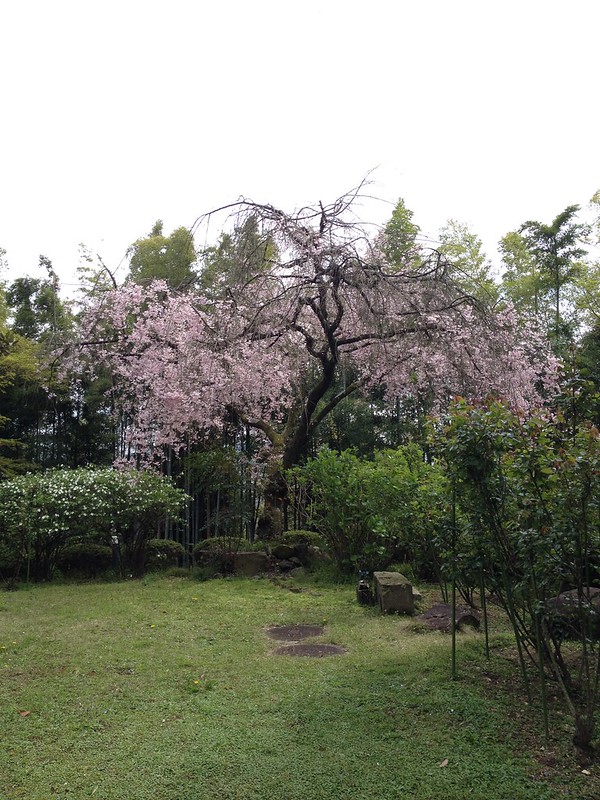 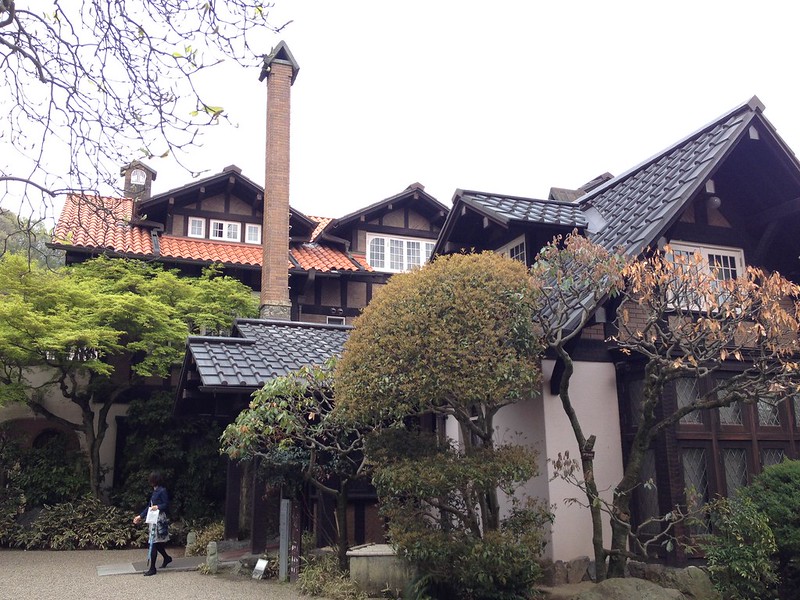 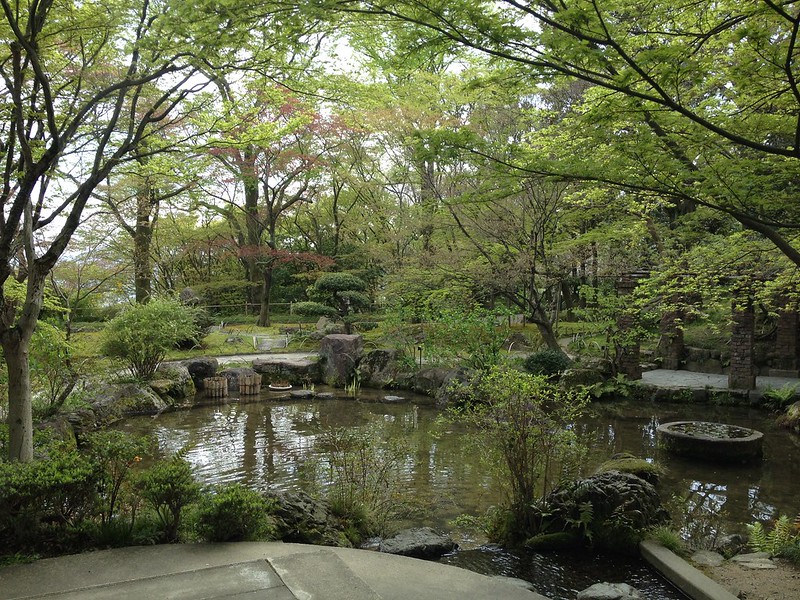 Japanese garden , from one of the glass doors.

I wanted to stay here , relax and enjoy the view unfortunately a group old folks where occupying the whole place and chatting their hearts away.
So on I go with my tour.
I decided to enjoy the view of the garden, and it was a better decision. 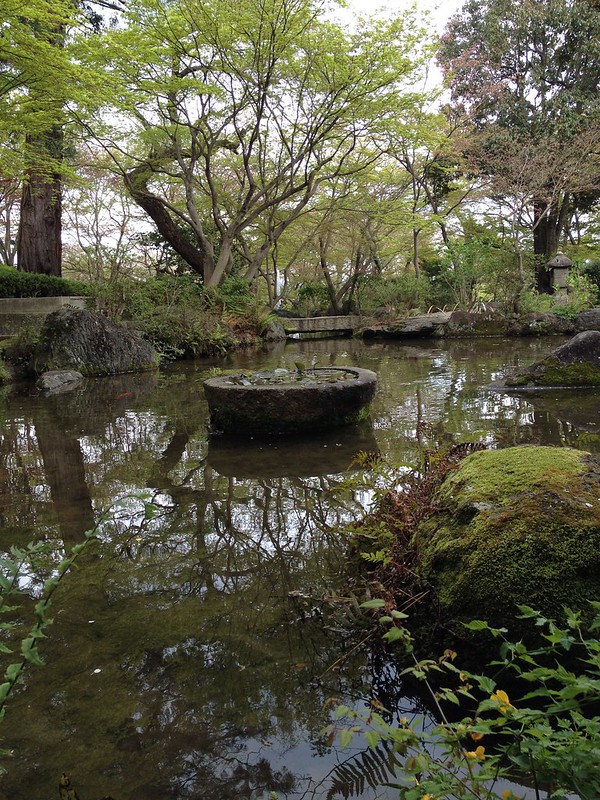 The garden and the pond from another angle. 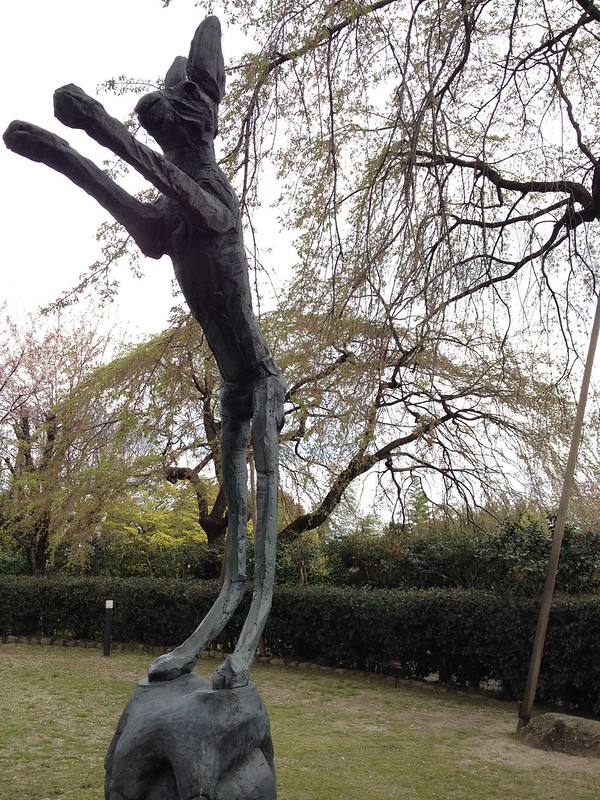 A rabbit sculpture. I think its really out of place in a very zen garden and it’s huge too. 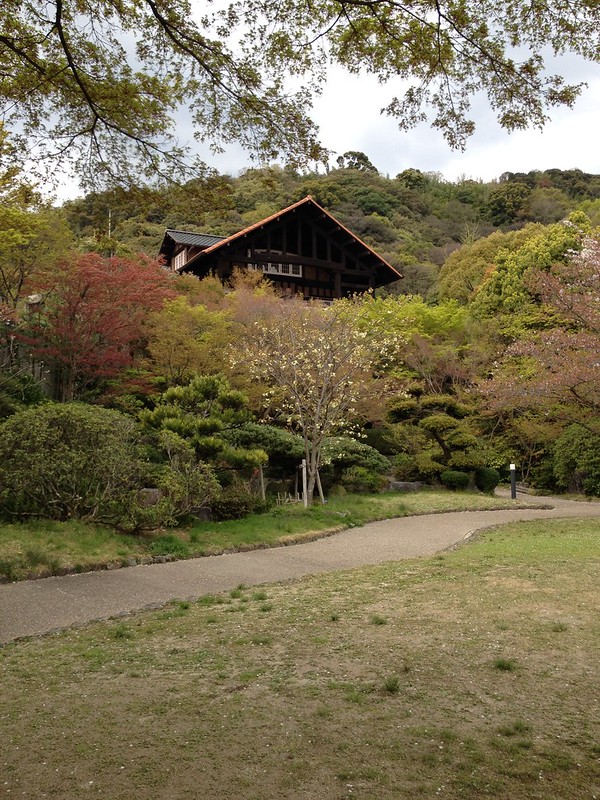 The view of the Villa’s veranda cafe from the garden. 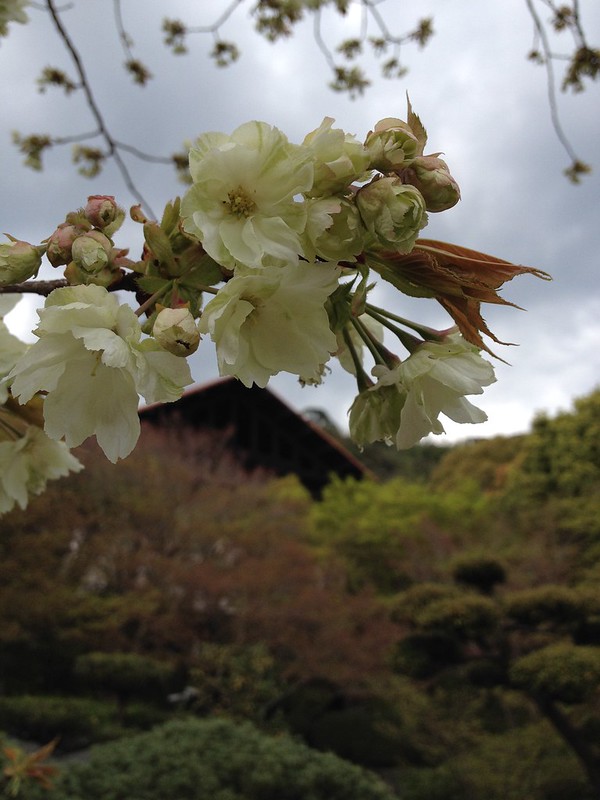 The green Sakura and the Museum.

You can reach the museum by taking JR or Hankyu Line and stop at Yamazak Station or Oyamazaki station respectively. Free shuttle bus is also available for guest from both station, check the schedule here.

I hope you enjoy the tour and please give it a quick visit when you visit Kyoto.

When a dear friend invited me to her friend’s Rakugo , I was very happy. The price was also discounted, later found out that the seats assigned to us where the one which are normally does not sell, the farthest corner of the hall.

The artist was Katsura, Shunchou and it was his 20th Anniversary as a story teller. I thought that maybe it will last for only an hour or so, but it lasted more than 4 hours and during that period, I laughed , cried and was moved by the emotion he put into the story telling.

The second part of storytelling was about a letter or lyrics that a father once wrote and was found by his son after his death. Instead of just reading it, Katsura-san decided to sing it for us.

The title : 手紙～親愛なる子供たちへ(A Letter – A Parents Love for a Child).

There are lots of emotional part of the lyrics but my dear friend who is a parent could not hold it any longer and was sniffing and sobbing beside me.

During the part where it says: ” When I could no longer stand up or tie my shoes.. please Lend me your hand.” The tears just decided to come out and would not stop.

By the end of the song, my friend and I were a mess.

The third story was about Ertuğrul Fırkateyni, a Turkish ship which was caught by a storm at the coast of Wakayama Prefecture around 1890 . The boat sank but 69 survivors where rescued and nurse back to health by the resident of the island. The 69 sailors were safely returned to Turkey and vowed that this kindness will never be forgotten.

This promised was fulfilled during the Iran Crisis in 1985, when 200 Japanese were rescued by Turkey and was safely brought back home.

I don’t know why, but this story made me cry. I guess I was so moved by a 100 year-old promise that was kept.

To be moved liked this, Katsura-san is a really good story teller. I guess you will not stay in this business for 20 years if you don’t have talent.

It was definitely a nice afternoon spent with friends and tears :).

Have you ever been to a Rakugo? How was it?

If you are a Yayoi Kusama fan, then you must not miss a visit to Mastumoto Museum and see her permanent collection. 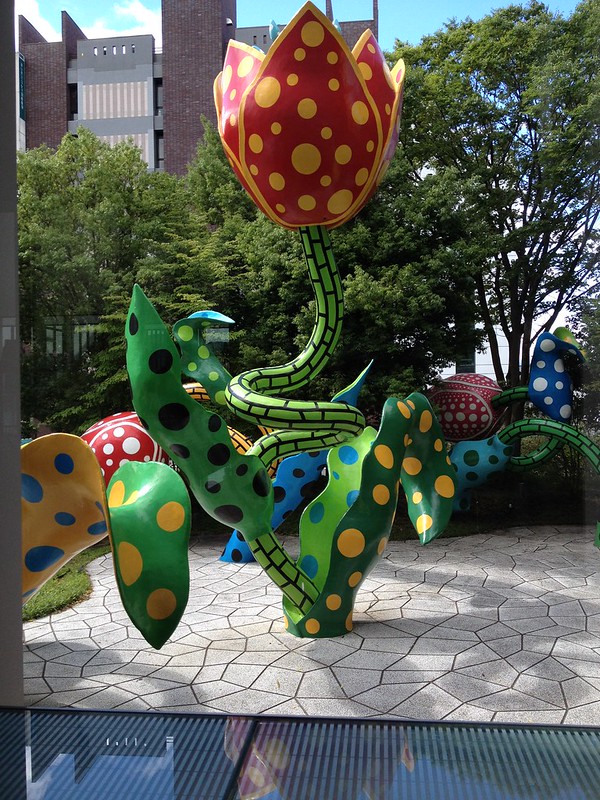 A big flower with lots of polka dot, as Yayoi can only do. 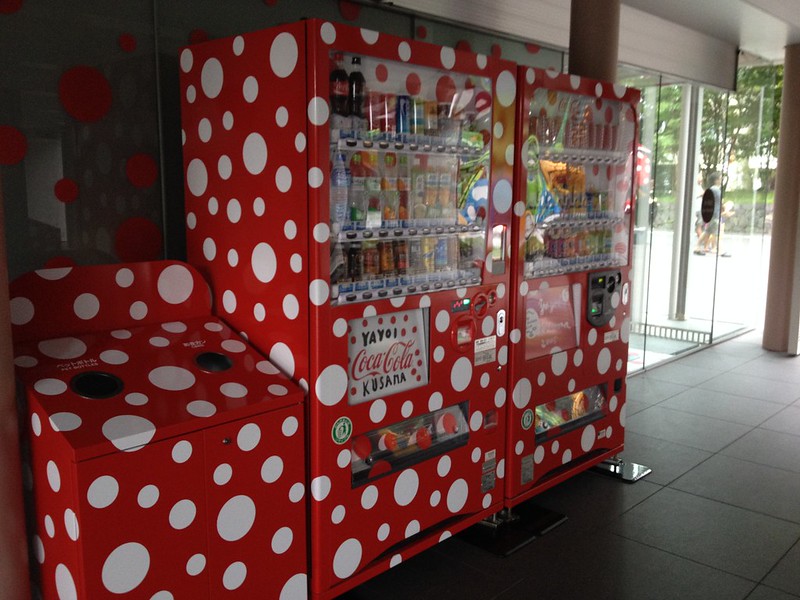 The polka dot vending machine. Just for show though. 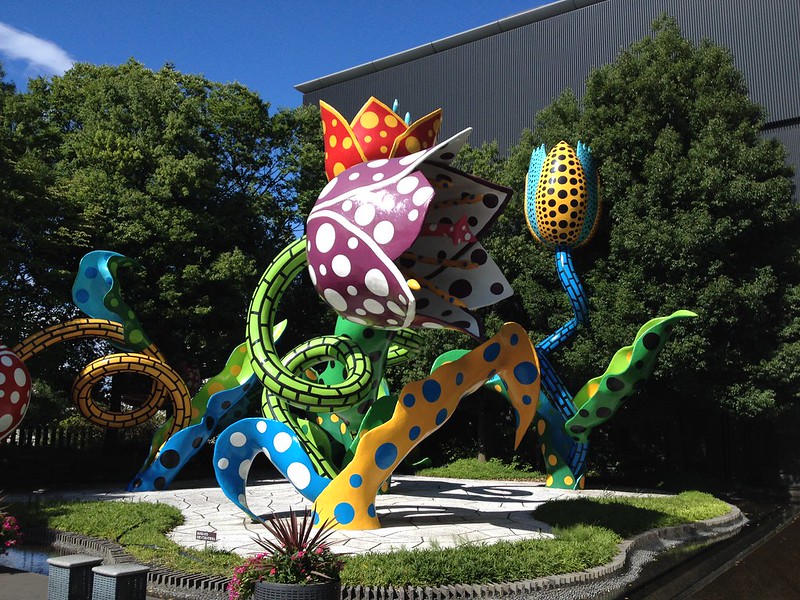 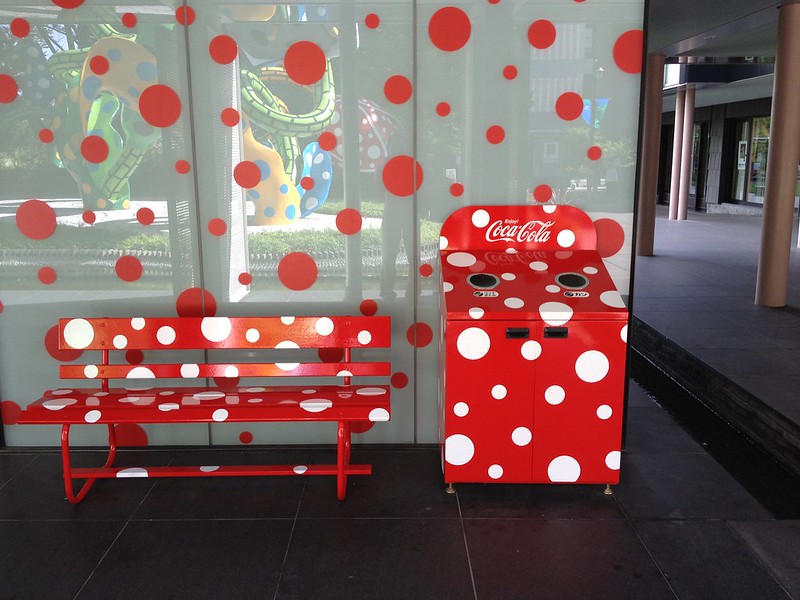 Want to take a seat ?

I found this artwork near Festival Hall Osaka and was immediately drawn to it.

Have a great weekend everyone.